The 26th meeting, which took place from 20 to 25 June 2022, was the first meeting of Commonwealth Heads of Government since 2018, as a result of disruption caused by the COVID-19 pandemic.

Ahead of the main meeting of Heads of Government, the CPA Secretary-General, Stephen Twigg addressed Commonwealth Foreign Ministers at a roundtable event, raising the issue of CPA status. The CPA Secretary-General also held a number of bilateral meetings with key stakeholders, spoke at different events and visited the Parliament of Rwanda during his visit to Kigali.

Blog: The CPA Secretary-General at CHOGM 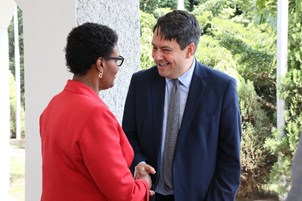 In the final communiqué issued by Commonwealth Heads of Government, the updated CPA Recommended Benchmarks for Democratic Legislatures were noted alongside a commitment to fully implement the Commonwealth (Latimer House) Principles on the Three Branches of Government.

Particular focus at CHOGM 2022 was given to climate change and its affects on the smallest jurisdictions in the world – many of them in the Commonwealth. The Commonwealth also admitted Gabon and Togo as its 55th and 56th members respectively.

The Commonwealth Women Parliamentarians (CWP) network played a prominent role in the Commonwealth Women’s Forum (CWF).  The Forum sought to demonstrate the value of including women as transformational actors who bring diversity into governance processes across political, public and private spheres.

CWF Workshop | Women in Leadership: Beyond the Numbers

At a session on Women in Leadership: Beyond the Numbers, which explored what meaningful leadership looks like and the benefits of having more women in positions of leadership, panellist Hon. Shandana Gulzar Khan, CWP Chairperson, said, “it’s not about fighting, it is about securing what already belongs to us”.

Elsewhere at the CWF, the CPA Secretary-General spoke at an event on the importance of accountability for gender equality, and Hon. Regina Esparon, Member of the Seychelles National Assembly, represented the CWP at a session on gender and climate change.

Panellists from the Women in Leadership: Beyond the Numbers event highlighted several takeaways from the event.

Women who do not have freedom over their own finances cannot access the opportunities that equip them to lead. Improving protections for women’s financial autonomy can secure new paths to leadership.

Pilot schemes looking to increase and improve women’s inclusion are a good start, but there is a real need for hard launches of larger scale initiatives.

The situation in Afghanistan, where girls’ education has been made illegal, has put a stark spotlight on the value of learning and what it can mean for millions of young women and girls across the world.

For more information about the outcomes of CHOGM 2022, visit the Commonwealth Secretariat’s website.

About Us
Learn more about the people in our organisation, how we're governed and our history
Commonwealth Women Parliamentarians
The CWP works to increase gender equality in 180 Parliaments and Legislatures across the Commonwealth.
Rwanda
Knowledge Centre
Discover CPA resources from our library, blog, podcast and research service