Chairperson of the CPA Executive Committee 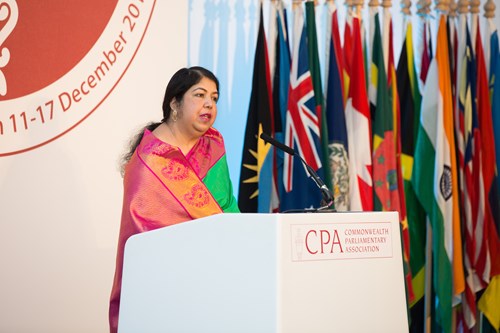 As State Minister for Women and Children, Dr Chaudhury promoted gender equality and contributed in formulating National Women Development Policy, Children Policy and Domestic Violence (Prevention and Protection) Act. As a Commonwealth Scholar she completed Doctor of Philosophy in Law from University of Essex, UK (2000) and was conferred an Honorary Ph.D. (2014). She was awarded Asia Society’s Humanitarian Services Award in 2010 for her role in preventing violence against women and has been a practicing Advocate of Bangladesh Supreme Court since 2009.

Hon. Dr Shirin Sharmin Chaudhury, MP was elected as the Chairperson of the CPA Executive Committee in October 2014 for a three-year term during the 60th Commonwealth Parliamentary Conference and General Assembly of the CPA in Cameroon. She undertook a wide range of activities on behalf of the CPA during her term in office. This culminated in the hosting of the 63rd Commonwealth Parliamentary Conference in Dhaka, Bangladesh in November 2017.

Our Governance
Learn more about how the CPA is governed
Commonwealth Parliamentary Conference
Find out about the CPA's annual conference.
Bangladesh