Recognising the need to increase representation of persons with disabilities in political institutions, the Commonwealth Parliamentarians with Disabilities (CPwD) network has been established to facilitate activities and programmes to champion and increase the representation of persons with disabilities in Commonwealth parliaments and to work towards the mainstreaming of disability considerations in all CPA activities and programmes.

Learn more about the network and who we are

In 2020, the network established its governing committee of nine regional champions. The CPwD Regional Champions have been chosen to represent each of the CPA’s nine Regions and will promote the rights of Commonwealth Parliamentarians with Disabilities in their Region and represent disability interests within the CPA. 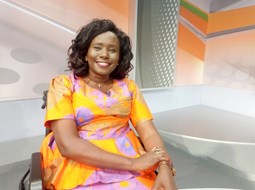 Hon. Dennitah Ghati HSC MP, from the National Assembly of Kenya, was announced as the CPwD Chairperson following the 2021 Q3 Meeting of the CPwD Regional Champions. The current term of office for the Chairperson runs from 2021 - 2024. Hon. Ghati succeeded the first CPwD Chairperson, Hon. Kevin S. Murphy MLA, Speaker of the Nova Scotia House of Assembly.

Hon. Dennitah Ghati HSC MP was nominated as a Member of the National Assembly of Kenya in 2017 to represent the special interests of persons with disabilities and she is the CPA Africa Region’s current representative as a CPwD Regional Champion. Previously working as a journalist in Kenya for The East African Standard Newspaper and in New York, USA for the American Jewish World Service. She subsequently worked for the League of Kenyan Women Voters and as a program manager for UNICEF Somalia.

In the 2013 Kenyan General Election, Dennitah Ghati was elected to the National Assembly as the first female representative for Migori county, representing the Orange Democratic Movement (ODM). A year later, on in March 2014, she was involved in a serious car accident in Nairobi that sadly resulted in a spinal injury and use of a wheelchair. As a result, she founded the Dennitah Ghati Disability Foundation, a non-profit foundation that seeks to empower persons with disabilities. In July 2018, she represented the Commonwealth Parliamentary Association at the Global Disability Summit.

The Strategic Plan, and a plain-text, accessible PDF version of the Plan, are available to download below. The CPA has also published a plain-text web version, designed for use with text-to-speech tools. To access this version, click here.

If you have any issues accessing the Strategic Plan, or other CPwD publications, please contact us via the website or at hq.sec@cpahq.org.

This is a plain-text, accessible version of the Commonwealth Parliamentarians with Disabilities (CPwD) Strategic Plan 2021 - 2024, which sets out the network's mission statement, outcomes, outputs and thematic priorities.

Learn more about the network's projects, activities and events

In August 2020, an investment fund was established to improve the physical accessibility of parliaments such as the procurement of assistive technology, or supporting persons with disabilities to seek higher office.

To find out more about the fund, contact us.

The Guidelines include toolkits on:

Both documents are available to download below. If your Parliament has used these resources to improve its methods of communication with persons with disabilities, please let us know by emailing hq.sec@cpahq.org.

This toolkit provides guidance, advice and education on how to protect and promote the mental health and well-being of Parliamentarians and parliamentary staff.

Use the 'Playlist' button (in-player, top right) to browse our webinars, masterclasses & more...

The CPA Mental Health Toolkit for Commonwealth Parliaments provides guidance, advice and education on how to protect and promote the mental health and well-being of Parliamentarians and parliamentary staff.