This blog post introduces the Handbook by providing an abridged introduction to IHL and the vital role it plays in the minimising of human suffering.

With a history predating even the Commonwealth Parliamentary Association’s 111-year existence, International Humanitarian Law (IHL) is amongst the oldest bodies of modern international law. Whilst the legal system of IHL has, since the Geneva Convention of 1864 and the 1868 St Petersburg Declaration, sought to minimise the unnecessary suffering of those affected by conflict, the importance of upholding IHL has nonetheless been thrown into sharp contrast in recent years.

Indeed, we are living at a time when conflicts are continuing to become increasingly complex, multifaceted and unconventional with the rise of issues around proxy conflicts, hybrid warfare, cybersecurity (and the rise of military technology more generally), and the emergence of violent non-state actors. Simultaneously we are living at a time when our exposure to images and footage of atrocities has never been greater. This over-exposure can simultaneously cause us great distress (indeed there is much evidence to suggest that coverage of conflicts can cause serious mental health difficulties - Time Magazine, Watching War Unfold on Social Media Affects Your Mental Health, 8 March 2022) whilst also tragically (and perhaps paradoxically) de-sensitising us to such material.

Whilst there are no easy answers to the tragedy of conflicts and their impacts on those directly and indirectly affected, a greater appreciation and understanding of IHL, and more importantly a commitment to upholding the legal principles contained within IHL treaties, can help to provide a framework with which to regulate armed conflicts. Whilst such frameworks may not alleviate all of our anxieties and fears, they may go some way towards appreciating that war is not an arena of unrestricted chaos. 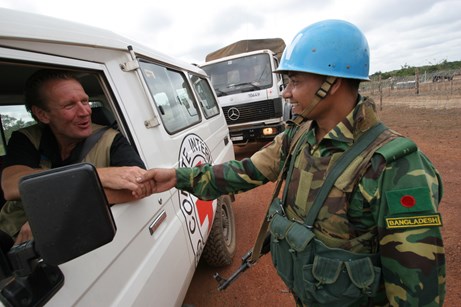 Whilst IHL is a distinct and distinguished body of law, it does complement and interact with other, equally distinct bodies of law, including international human rights law and international criminal law. Additionally, and importantly for Parliamentarians, IHL will also operate alongside national law, notably constitutional law, military law and criminal law. It is important to recognise that IHL does not operate in a legal vacuum and is a living, breathing body of law.

Furthermore, whilst current events highlight the continued relevance of IHL to global security and whilst IHL only applies directly in the case of IACs and NIACs, it is important to recognise that IHL has continued relevance during peacetime and an ongoing education and appreciation of this legal system can be invaluable.

Whilst, as previously highlighted, coverage of conflict, atrocities, and suffering can leave many feeling helpless, there is much that Parliamentarians can do to ensure the proper implementation and upholding of IHL and, by extension, much that can be done to protect those most at risk from the menaces of violence and conflict. The important contributions that can be made by Parliamentarians towards strengthening IHL are contained within the updated publication International Humanitarian Law: A Handbook for Commonwealth Parliamentarians, a joint collaboration between the Commonwealth Parliamentary Association and the British Red Cross.

The Handbook has been developed in partnership with the British Red Cross to support Parliamentarians in promoting International Humanitarian Law (IHL) and ensuring its effective implementation.

Some of the functions that Parliamentarians can undertake in relation to IHL include:

Whilst recognising the important role of IHL on the national and international stage, and the contributions of Parliamentarians in strengthening and implementing IHL, there is also value in appreciating what IHL is not designed for.

Crucially, IHL does not govern where there is or is not a legitimate use of force. The 1945 Charter of the United Nations, in combination with customary international law, provides rules on the legitimacy of force (jus ad bellum), though there does of course remain ample scope for consideration of these matters by Parliamentarians and debates on such matters may be some of the most important that many Members will engage in during their parliamentary career.

The illegitimate use of force can lead to illegitimate wars and conflicts which may have ramifications for the status of a country and the wellbeing of the population. As the representative branch of government, it is, therefore, vitally important that Parliaments adequately scrutinise any use of force or intended use of force by the state.

Lessons for Members of Parliament: 5 ways to be an IHL advocate in your Parliament

For further information about the CPA's work on IHL please email hq.sec@cpahq.org.

Resources and Further Reading:
The below provides an overview of a number of core IHL Treaties and additional international legal instruments.

What can parliamentary democracies do to remember victims of genocide and prevent future genocides?