Broadcasting parliamentary sittings live on television and the internet was already common practice amongst Commonwealth Parliaments before the pandemic. The CPA’s Recommended Benchmarks for Democratic Legislatures state that Legislatures should ‘ensure that the media are given appropriate access to the proceedings of the Legislature’, and the 2012 Declaration on Parliamentary Openness calls on Parliaments to ‘provide citizens with real-time and on-demand archival access to parliamentary proceedings through radio, television and the Internet’.

However, the closure of public galleries and restrictions on access to parliamentary buildings during the pandemic accelerated the establishment of ‘livestreaming’ options in many Commonwealth Parliaments. The number of plenary rooms using video streaming tools rose from 54% in 2018 to 65% in 2020 and 54% of Parliaments said they’d introduced or used webcasting in new ways in the last two years. The growing number of ways that citizens can closely follow parliamentary proceedings is most certainly a boon for openness, accessibility, and public engagement. Public viewing galleries should and will re-open, but the opportunity for more citizens to watch Parliament from every angle on their mobile phone will undoubtedly be a positive legacy of pandemic innovation.

On International Day of Democracy, the CPA is spotlighting the progress made in expanding livestreaming of parliamentary proceedings in three Commonwealth Parliaments during the pandemic: Fiji, Singapore and Kenya.

In August 2020, the Parliament of Kenya, which has broadcast plenary sessions since 2008, established a Working Committee to design a model TV channel to broadcast 24/7 coverage of plenary sittings, committee meeting, countries assemblies and other Parliament-related content. The Working Committee’s work informed a report published by the Kenyan Parliament’s Select Committee on Parliamentary Broadcasting and Library in November 2020. The report recommended that the Parliamentary Service Commission begin acquiring equipment and staff to establish fully-fledged Parliamentary television channels and radio. It observed that coverage should reach the entire country and that the stations should air uninterrupted proceedings of plenary and Committee meetings, alongside a range of other specialist productions.

In 2019, the Parliament of Kenya conducted a self-assessment against the CPA Recommended Benchmarks for Democratic Legislatures. To complete the assessment, CPA consultant Anthony Staddon met with the Rt Hon. Justin B. Muturi MP, Speaker of the Kenya National Assembly and the CPA Africa Regional Chairperson; Hon. Aden Duale MP, Majority Leader in the House; Michael Sialai, the Clerk at National Assembly of Kenya, and officials from the Senate of Kenya, to discuss legislation, oversight, representation, the autonomy of Parliament and the budget-making process. The final report noted that the Parliament 'has a key role to play in terms of supporting continuing civic education and improving public knowledge and support of the legislature.' The decision to work towards creating a full time broadcasting station that airs content specifically on the work of Parliament therefore represents a positive step towards making Parliament more open and accessible to the public. 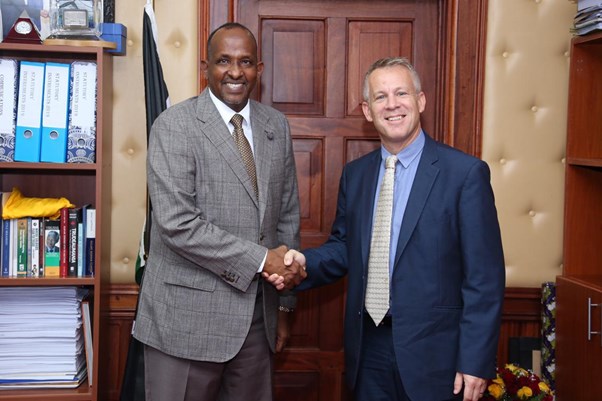 Above: CPA consultant Anthony Staddon (right) met with Hon. Aden Duale MP in 2019 to discuss the Parliament of Kenya's self-assessment against the CPA Recommended Benchmarks for Democratic Legislatures

To keep Members safe and the public up to date during the pandemic, the Parliament of the Republic of Fiji broadcast Parliament and Committee sittings on a free-to-air television channel and on the Parliament’s social media channels. To make the livestreaming of parliamentary sittings more comprehensive, the Parliament also brought in an external contractor to integrate video conferencing in Committee rooms and to set up Parliament TV. Parliament now has two television control rooms, allowing for more flexible broadcasting from the different parts of the Parliament building. 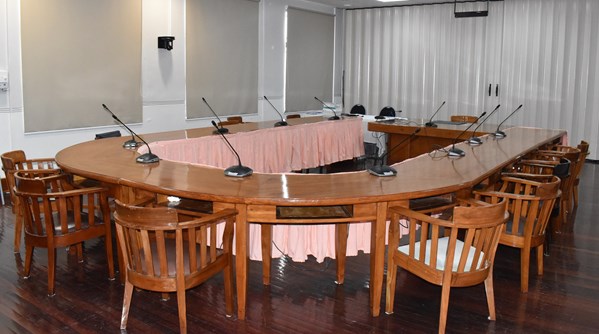 Above: A Committee room in the Parliament of the Republic of Fiji before the pandemic. Investment in technology has now added facilities for livestreaming from Commitee rooms

The Parliament of Singapore also began livestreaming sessions for the first time at the start of 2021. Original and translated versions of debates were made available live on the Ministry of Communication and Information’s YouTube channel.

‘The Government has agreed to this (livestreaming) in view of the global and technological trends, which have made online streaming more feasible and enabled legislators around the world to livestream their proceedings.’ 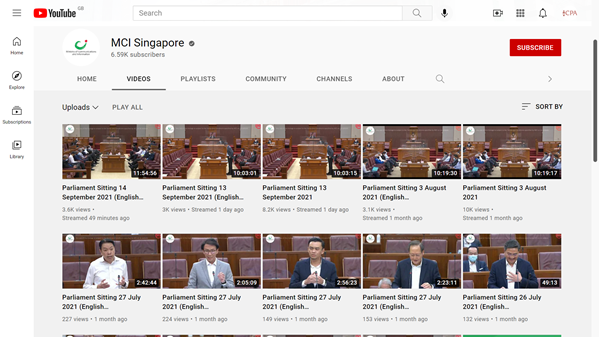 Above: The Ministry of Communication and Information's YouTube channel, where citizens can watch live video of parliamentary sittings

The first ever livestream from the Parliament, on 4 January 2021, has been viewed 19,000 times [as of September 2021], indicating significant public interest in the debates and a positive reaction to the initiative. More than 6,500 people are also subscribed to the channel, allowing them to be notified when parliamentary sittings begin.