Across the Commonwealth, the way in which Members register an official vote on behalf of their constituents varies from Legislature to Legislature, dependent on the number of Members, the resources of the Legislature and even the way chamber is constructed. In the Lok Sabha, one of the largest houses of Parliament in the Commonwealth, Members use an automatic vote recording system by pressing buttons installed into their seats.[1] In the United Kingdom, Members walk into physical ‘Aye’ and ‘No’ areas, known as division lobbies, where ‘tellers’ count them in. In small Legislatures such as Anguilla, votes are usually recorded using voice votes or rising votes.

The common theme linking these varied voting methods is the requirement to be present in the debating chamber. Before the COVID-19 pandemic, almost every democratic representative in the world had to be inside the Parliament building to vote. Or, in the case of a proxy vote, they at least had to make sure someone else was available to vote in-person on their behalf. In 2018, only 1% of Legislatures used remote plenary voting systems.

The onset of the pandemic, and the subsequent need for strict social distancing measures, made it very difficult for Parliaments to facilitate every Member coming to the chamber at the same time to vote on a motion. This issue was particularly acute for the UK House of Lords. There are 789 sitting Members of the Lords, making it the second largest legislative chamber in the world, but there is estimated to be only enough physical space for 230 Members.

The solution chosen by the UK House of Lords was to implement, for the first time in its history, a remote voting system. On International Day of Democracy, Luke Hussey, Delivery Lead in the House of Lords’ Transforming Digital team and former Clerk of the Table Office, tells the CPA how the system was implemented, how it worked, and what’s next for voting procedures in the chamber ‘post-pandemic’.

[1] The Lok Sabha is the second largest lower chamber in the Commonwealth by number of Members, behind the UK House of Commons. 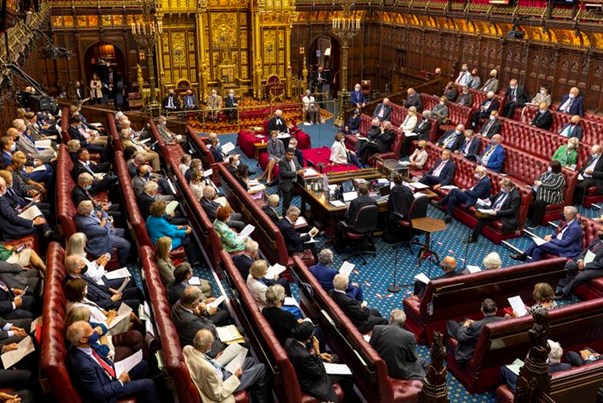 "The UK House of Lords returned from its summer recess on 6 September 2021 to full physical proceedings for the first time in many months while retaining some beneficial changes and innovations made since COVID-19 sent the UK and its Parliament into a ‘stay at home’ lockdown in March 2020.

One of the results of the new pandemic era of virtual necessity and invention was online-only voting for the Members of the House of Lords.

Like many legislative chambers around the world, the House of Lords had to find new ways to carry on working, including virtual contributions to the Chamber and a way to record votes (divisions) safely.

Instead of members voting in narrow division lobbies, filing past Clerks who recorded their names in a space where social distancing was impossible, an online voting system was commissioned and built from scratch. The new website, PeerHub, was developed and delivered by House of Lords staff within five weeks and went live on 15 June 2020. 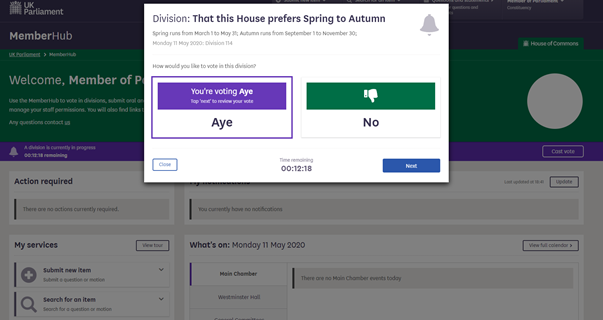 The first ever online division took place at 4.44 p.m. that day on an amendment to the Extradition (Provisional Arrest) Bill with 531 members voting.

Here’s how it works: a Member receives an alert to a smartphone, laptop or other device by text or email, signs in to PeerHub and casts his or her vote.

In the first year of PeerHub there were 183 online divisions with 89,979 votes cast at the touch or click of a button.

Since the House of Lords returned to more ‘normal’ proceedings and to avoid crowded lobbies, Members can still vote online but only from a place of work on the Parliamentary estate (except for some disabled Members who are not attending the House physically). The House of Lords will introduce electronic pass-readers in and around the Chamber this autumn which will guarantee that Members are on the estate when voting."