How can Commonwealth Parliaments become more diverse workplaces for their staff?

Irving Anderson, a member of parliamentary staff at the UK Parliament, writes about how the introduction of Workplace Equality & Diversity Networks (WEDNs) has helped to create a diverse and inclusive workplace for all.

The CPA has published 'Parliamentary Workplace Equality & Diversity Networks: Case Studies from the Commonwealth,' a case study compilation that expands on this blog post by introducing WEDNs and providing examples of their use in various Commonwealth Parliaments. Click here to download the publication ->

In the modern working world, there has been a push for employers to accommodate a greater diversity of individuals in their respective companies, organisations, and teams. By engaging with a more diverse workplace, businesses worldwide can add value to their work, contributing more to colleagues’ wellbeing and ability to participate. As such, it is equally vital that such diverse communities can meet, share experiences, and offer proposals for companies in employing more inclusive strategies in the workplace.

Perhaps one of the most important places such conversations about diversity strategies should be happening is in our democratic institutions. Acting as a beacon for representation, it is only natural that Parliaments around the world should look towards providing an environment for their staff to raise issues relating to diversity.

In the UK Parliament, one of the ways this has manifested is in the formation of Workplace Equality Networks (WENs), which are open to all parliamentary passholders. These are: 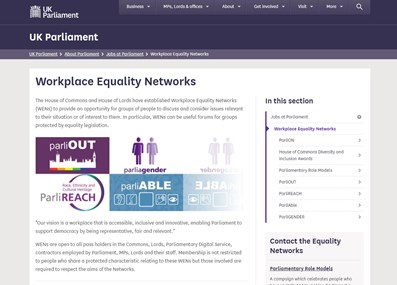 The first WEN, ParliOUT, was established at the end of 2010. With backing from the Speaker of the House of Commons at the time, Rt Hon. John Bercow, the network has been supporting LGBTQ+ colleagues across both the House of Commons and the House of Lords for ten years. To effectively champion diversity and inclusivity in Parliament, ParliOUT has launched several campaigns since its inception to engage and raise awareness for the community at large. This has included initiatives to raise money for LGBTQ+ charities, a ‘buddy’ scheme to welcome new LGBTQ+ colleagues and leadership programmes that educate colleagues in maximising diversity in the workplace.

The work of ParliOUT has been acknowledged repeatedly, with organisations such as Stonewall recognising the positive impact the implementation of a WEN has had in Parliament. This contributed to both the House of Commons and House of Lords being ranked in the top 100 of the Stonewall Workplace Equality Index (WEI) in 2020.

However, it is important to note that WENs do not operate in vacuums, with collaborations between networks a frequent occurrence. The ParliOUT and ParliREACH WENs attended UK Black Pride as a collective unit, amplifying the voices of two minority groups together. Furthermore, ParliOUT and ParliGender have been able to provide evidence to the Women and Equalities Select Committee inquiry into transgender equality.

Read more: How a ParliREACH report instigated change in the UK Parliament ->

As some of the WENs enter their second decade of operation, greater efforts are being made to reach out to equality networks nationally and internationally. This has included working with other organisations from the National Assembly of Wales to the Congressional Staff Associations of the US Congress and Library of Congress. The value of sharing experiences and openly discussing issues relating to diversity and inclusion, particularly internationally, is invaluable to making the world’s workplaces more accommodating to minority communities.

Irving Anderson is a Personal Assistant and Office Manager to Lord Norton of Louth in the UK House of Lords.

For further information about the Workplace Equality Networks (WENs) at the UK Parliament, click here ->

This case study compilation introduces Workplace Equality & Diversity Networks (WEDNs) and provides examples of their use in Commonwealth Parliaments.

This toolkit provides guidance, advice and education on how to protect and promote the mental health and well-being of Parliamentarians and parliamentary staff.