Working with Commonwealth countries to address a common threat

Francesco La Camera writes about the work of the International Renewable Energy Agency (IRENA) in addressing climate change and renewable energy which is vital in many countries of the Commonwealth.

Global temperatures are rising. As I write this, extreme weather patterns sweep their way across all corners of our world. Floods took a heavy toll on human life and resources in India and Bangladesh. Hurricane Ida is leaving a trial of devastation across the eastern United States of America. Meanwhile on the west coast of the USA thousands are being evacuated due to the type of wildfires that have also gripped southern Europe and prompted Greece into the creation of a climate crisis ministry.

Climate change has become a very real and painful reality for many people and communities today. This is especially true for a number of Commonwealth countries, particularly island states in regions such as the Pacific and Indian Oceans and in the Caribbean which are among the most vulnerable to the impacts of rising sea levels.

With July 2021 recorded as the hottest month in history, there can be no hiding from the reality that our current trajectory is towards climate catastrophe. The Intergovernmental Panel on Climate Change’s 6th Assessment Report confirmed as much recently, reporting that unless the world eliminates emissions by mid-century, the consequences of climate change could take hundreds or even thousands of years to reverse. This was perhaps the ‘red alarm’ needed to encourage much greater action.

The positive news is that the technologies we need to achieve a net zero energy system by the middle of the century largely exist and are increasingly cost-competitive for all countries, not just a few. The World Energy Transitions Outlook (WETO), the International Renewable Energy Agency’s (IRENA) roadmap to a net zero energy system, highlights that through the use of existing emission-reduction solutions such as modern sources of renewable energy, together with rapidly emerging technologies such as green hydrogen, we can achieve a net zero future in a way that is economically attractive.

“The positive news is that the technologies we need to achieve a net zero energy system by the middle of the century largely exist and are increasingly cost-competitive for all countries, not just a few.”

Our scenario envisages a blend of technologies including decarbonised power systems dominated by renewables; increasingly efficient energy production to ensure economic growth; increased use of electricity in buildings, industry and transport to support decarbonisation; expanded production and use of green hydrogen, synthetic fuels and feedstocks; and targeted use of sustainably sourced biomass.

These are not distant aspirations but achievable aims that we stand on the cusp of fully embracing. In that respect, 2021 may serve as a turning point.

Unprecedented Momentum
Once seen as an ambitious and overly progressive view of a renewable energy future, IRENA’s energy transition perspective has quickly become the mainstream vision for the road ahead. Today, our scenario is widely accepted as an achievable and cost-effective pathway to a net zero future based largely on the technologies available to us today.

This is reflected in the fact that a growing number of countries have made commitments to net zero strategies over the last 12 months, creating unprecedented political momentum for a transformative change. Today, over 170 countries have renewables targets - many of them in their Nationally Determined Contributions (NDC). Major economies accounting for 70% of global CO2 emissions have set targets for carbon neutrality by 2050. And markets are already pricing in energy transitions.

Renewable energy is saving people and governments money. Projects brought online in 2020 alone will save emerging economies up to US$156 billion over their lifespan. Sixty-two per cent of total renewable generation capacity added in 2020 achieved lower costs than the cheapest fossil fuels, and renewables increasingly undercut existing coal’s operational costs too, giving all countries a strong business case to power past coal.

This trend is unstoppable, but as our roadmap highlights, there is still much to be done. To limit rising temperatures to 1.5⁰ C degrees, significant energy investments must be redirected away from fossil fuels to support the transition. In this critical decade of action, the international community must look to this trend as a source of inspiration to go further.

Supporting cooperation and capacity development across the Commonwealth
Commonwealth countries are amongst the most vulnerable to the impacts of climate change, yet they are also among the most committed to addressing it. IRENA has worked closely with its Members from the Commonwealth for over a decade on the importance of the energy transition, at country, regional and international level through several initiatives.

The Agency’s engagement takes several forms. One of the most prominent is our Renewables Readiness Assessment (RRA) process. Here, the Agency works in close collaboration with the Member to assess the extent to which a country has all the necessary regulatory, political and financial components in place to support the deployment of renewable energy.

In addition, RRAs provide a set of recommendations specific to the country’s development of renewable energy and covers areas such as policy, regulation, risk, investment, skills development, electrification and generation, and end-use applications. IRENA has collaborated with several Members, that are also Commonwealth countries, to produce RRAs, including Fiji, Grenada, Ghana, Pakistan, Vanuatu, and Zambia, amongst others.

“Commonwealth countries are amongst the most vulnerable to the impacts of climate change, yet they are also among the most committed to addressing it.”

The most recent RRA was jointly published in August 2021, by IRENA in collaboration with the Botswana’s Ministry of Mineral Resources, Green Technology and Energy Security (MMGE) . The RRA identified 13 key actions that could significantly impact the energy transition in Botswana. Two of the key actions include the promotion and facilitation of a clear long-term vision for renewable energy development and operationalising the country’s regulatory authority.

Project facilitation in the Commonwealth
While our work to offer policy guidance and capacity building is a core to the Agency’s mandate, we are equally as engaged in project facilitation. As part of the IRENA/ADFD Project Facility, the Abu Dhabi Fund for Development (ADFD) finances innovative projects identified by IRENA to expand sustainable and equitable energy access in developing countries. Several projects in Commonwealth countries are amongst the beneficiaries.

In total, our partnership has committed US$350 million to projects that deliver clean energy to more than 4 million people in 26 countries around the world. Commonwealth countries that have benefited from the partnership to secure funding for renewable energy project implementation include Antigua and Barbuda, Guyana, Maldives, Mauritius, Saint Vincent and the Grenadines and Seychelles to mention just a few.

Parliamentary engagement
Parliamentary engagement is a high priority for IRENA. Parliamentarians witness first-hand the devastating impacts on local communities, and are on the frontlines, assisting their constituents and dedicating their work to saving and improving lives, especially in these difficult times. They are an asset to their respective countries and regions, as well as the global community at large as they have seen the crucial link between energy, health and welfare. In essence, the importance of universal access to energy in achieving developmental priorities has become further crystallised. 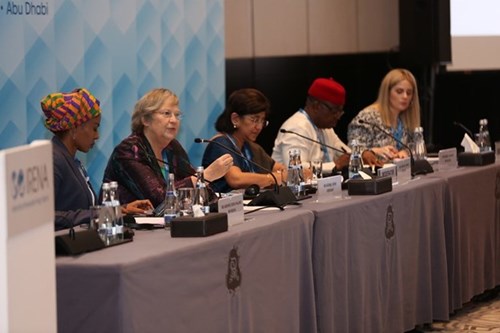 Above: The 5th IRENA Legislators Forum took place on 10 January 2020 in Abu Dhabi, and discussed the role of engaging communities to accelerate the energy transformation and promote a fair and just transition. Find out more information about the IRENA Parliamentary Network by clicking here.

In recent years, IRENA has enhanced its parliamentary engagement work by sharing the latest knowledge, experience and best practices on renewable energy socio-economic benefits and on specific related topics, and by convening Parliamentarians from across the world to discuss global, regional, and local energy transition related issues in an effort to promote knowledge sharing and where possible identify common ground to promote cooperation.

A Way Forward
There is no doubt 2021 is a critical year, which could be a turning point in global efforts to decarbonise energy systems in line with a net zero future. COP26 must signal a shift towards a more action oriented global agenda that prioritises progress over pledges. Time is short and our options to achieve a climate safe future are narrowing but there is hope that the unprecedented momentum for energy transition we are currently witnessing is merely the start of a period of accelerated and more concerted action.

Building the political and public consensus needed to mobilise public and private climate resources would not be possible without the key role play by Parliamentarians. The establishment and continuity of regulatory frameworks that encourage private sector participation in the energy transition are essential components of success that are largely driven by MPs. Additionally – and critically – Parliamentarians engage in public debate and are pivotal to driving and upholding consensus. For these reasons, Parliamentarians are not only highly valued partners to IRENA, but they are also indispensable climate action champions.

To align with a climate-safe path by 2050, we must be on track this decade, which will require unprecedented levels of cooperation. Here the Commonwealth and its Parliamentarians have a unique opportunity to foster international collaboration and ensure we can turn ambition into action and build a future that is inclusive, sustainable and prosperous for all.

This blog post is an extract from a longer article in The Parliamentarian (2021 Issue Three) - to read the full article please click here.