Why Commonwealth Parliamentarians are integral to the fight against climate change

The Commonwealth Secretary-General, Rt Hon. Patricia Scotland QC highlights the key role of Parliamentarians and the impact of Commonwealth projects on climate change.

The landmark report released recently by the Intergovernmental Panel on Climate Change (IPCC) has put the world on red alert. Titled ‘Climate Change 2021: the Physical Science Basis’ , it contains significant and unequivocal evidence about the disturbing speed, extent and intensity with which the global climate crisis is unfolding.

The science is crystal clear, and what it proves is something every legislator and policymaker in the Commonwealth must recognise: climate change is caused by human activity; it is happening at an unprecedented rate; and its impacts are intensifying and affecting millions of people across the world – in particular, those living in the most vulnerable nations.

Without significant actions taken by governments to curb global warming to 1.5°Celcius above pre-industrial levels, we are headed towards irrevocable and destructive transformations to our environment and way of life.

Already we can see the devastating impacts in all corners of the Commonwealth, including the increasing frequency and intensity of extreme weather events, from super storms to raging floods and wildfires. The World Meteorological Organization (WMO) points out that the number of disasters related to a weather, climate or water hazard has increased fivefold worldwide from 1970 to 2019. On average, these disasters kill more than 800 people each week, while causing around US$202 million in losses each day.

At the same time, more subtle impacts continue to put lives and livelihoods at risk. Sea level rise is damaging crops and homes in coastal communities in the Pacific, while droughts and changing rain patterns are driving up food prices, putting pressure on tens of millions of people in Eastern and Southern Africa. Climate change is also expanding the range of zoonotic infectious diseases - those that pass from animals to humans – due to changing natural environments. These are realities affecting people and communities, which cannot be ignored. 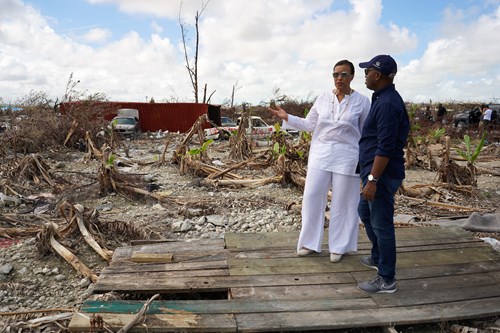 Above: The Commonwealth Secretary-General views the damage on a visit to The Bahamas in 2019 following the Category 5 Hurricane Dorian.

Role of Parliamentarians
Parliamentarians play a vital role in tackling the global climate crisis. As well as working on legislation, regulations and policies, they have an important function in holding governments to account on national and international commitments, including the Paris Agreement – the only legally binding international treaty on climate change.

In addition, Parliamentarians have a responsibility to monitor the implementation of climate laws and to ensure that vital resources are allocated within national budgets to ensure climate goals are achieved.

More than 130 countries have adopted or are considering net-zero carbon emission targets to combat climate change. In other words, their policymakers have either successfully passed or are currently discussing potential legal measures that aim to prevent new greenhouse gas emissions being added into the atmosphere, which is the main driver of climate change.

In the Commonwealth, at least four countries – Canada, Fiji, New Zealand and the UK - have enshrined net-zero targets in law. Eight more member countries have either proposed legislation or include it in a policy document, while about 30 others are discussing the target. Parliamentarians are central to the outcomes of these discussions, with the ability to steer the national debate and focus.

Parliamentarians also serve as an important conduit for the will and voices of their constituencies. As public awareness about climate change increases around the world, there are mounting calls for urgent action, including from vulnerable populations. According to a global survey of public opinion conducted by Oxford University and the United Nations Development Programme (UNDP), a clear majority (64%) said that climate change was an emergency, out of 1.2 million respondents in 50 countries.

Of this group, 59% said that the world should do everything necessary urgently to respond. The highest level of support was in small island developing states (74%), followed by high-income countries (72%), middle-income countries (62%), then least developed countries (58%). Nearly 70% of young people (under 18) said climate change was a global emergency, compared to 65% of those aged 18-35, 66% aged 36-59 and 58% of those aged over 60. Members of Parliament are essential to ensuring these voices are heard and enabling these populations to participate in decision-making around climate change.

Capacity-building
However, to be effective, Parliamentarians need to be equipped with adequate knowledge and up-to-date skills related to climate policy, climate science and relevant networks. Parliamentary Committees require resources to meet, research and coordinate action with stakeholders such as civil society and government agencies, as well as hold relevant discussions and consultations. A number of Commonwealth countries face capacity constraints that can hinder the effectiveness of Parliamentarians in the climate space. Capacity-building and knowledge-exchange programmes can be useful in this regard.

The Commonwealth Parliamentary Association provides valuable opportunities for representatives in Legislatures and Assemblies of nations and territories to exchange knowledge and experiences of what has worked and what has not worked in their efforts to address climate change. Practical guides are currently available to support policymakers to be more effective in implementing national climate plans and meeting Paris Agreement commitments.

Commonwealth key issues
This November, Glasgow will host the world’s most important climate summit of the year, the United Nations Climate Change Conference, COP26. At this event, it is crucial that Commonwealth countries, which make up over a quarter of signatories to the Paris Agreement, come together once again to take a united stance on climate issues.

Member countries are looking to agree on a set of shared priorities to take to the summit, including the overriding commitment to limit the rise in global average temperature to well below 2°Celsius, while pursuing efforts towards a 1.5°Celsius maximum. The support of Commonwealth Parliaments will give further impetus to our joint efforts.

Our window of opportunity
The upcoming UN Climate Change Conference COP26 will take place at a decisive point in history, as the world grapples with an unprecedented global pandemic that is exacerbating the impacts of the ongoing climate crisis. As we seek to build back better, we must approach COP26 committed and ready to take bold actions that will set us on more sustainable pathways for generations to come. As leaders and elected officials, Parliamentarians have pivotal roles to fulfil in delivering that shared vision, to ensure the survival of our communities and the well-being of all who live in our Commonwealth.

This blog post is an extract from a longer article in The Parliamentarian (2021 Issue Three) - to read the full article please click here.