At a special ceremony on Thursday 18 November 2021, the Commonwealth Parliamentary Association (CPA) signed a new Memorandum of Understanding (MoU) with the Parliamentary Assembly of the Mediterranean (PAM).

The new collaboration will bring the two organisations together to share expertise in several areas including parliamentary strengthening, sustainable economic development, the protection of human rights, addressing climate change, gender equality, responding to the COVID-19 pandemic and parliamentary diplomacy for peace and security. 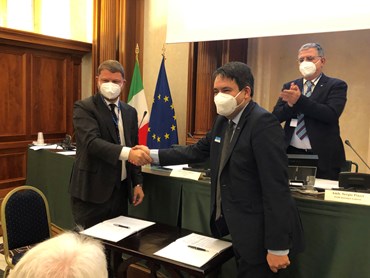 The PAM is an international parliamentary organisation, and a Permanent Observer at the United Nations General Assembly, which brings together 34 Member Parliaments from the Euro-Mediterranean and Gulf regions. Two of its Member Parliaments – Cyprus and Malta – are also Members of the CPA. The CPA is an international community of 180 Commonwealth Parliaments and Legislatures at national, state, provincial and territorial level who working together to deepen the Commonwealth’s commitment to the highest standards of democratic governance.

Through this new collaboration, the two organisations will bring together their Members to engage in productive discussions, share legislative experience, and work towards constructive approaches to achieving political consensus.

The CPA Secretary-General, Stephen Twigg signed the MoU with PAM on behalf of the Association and said:

“One of the CPA’s strategic priorities is to increase its work with international partners and so I am delighted to sign this new MoU with PAM to cooperate on important areas, including human rights, good governance and the Sustainable Development Goals. There are many areas of shared importance between our two organisations and our Members will benefit from these new partnerships.”

“We are really impressed by the wide scope of the CPA network as it links over 180 national, state, provincial and territorial Parliaments and Legislatures, divided up between the nine geographic regions of the Commonwealth. Therefore, we truly believe that our cooperation will lead to a very interesting and unique policy exchange. I am also confident that this agreement will allow for both parties to actively participate in each other’s activities, thereby increasing the valuable exchange of practices.”

The Commonwealth Parliamentary Association Strategic Plan for 2022-2025 sets out its support for our membership of 180 Commonwealth Parliaments as well as how the organisation will advance and develop support to CPA Members through focusing on six core objectives and cross cutting themes that will be mainstreamed across CPA operations and workstreams.

This toolkit provides various measures and recommendations that can be adopted by both Parliaments and Parliamentarians in order to continue to deliver on the Legislatures’ role of scrutinising legislation and delivering democracy during a global pandemic.

About Us
Learn more about the people in our organisation, how we're governed and our history
Our Networks
Lean about the networks that the CPA supports
Where We Work
Find out more about the CPA's Regions and Branches
Knowledge Centre
Discover CPA resources from our library, blog, podcast and research service

21 May 2022, 12:00
Guyanese Parliamentarians gather expertise from across the Commonwealth at CPA seminar
News

Guyanese Parliamentarians gather expertise from across the Commonwealth at CPA seminar

Members of the Parliament of Guyana have taken part in a professional development seminar delivered by the Commonwealth Parliamentary Association (CPA) from 10 to 11 May 2022.

The first Conference of Speakers and Heads of African Parliaments (CoSAP) was held in Abuja, Nigeria from 9 to 10 May 2022 on the theme of ‘Enhancing Africa’s Post-COVID economic recovery through parliamentary leadership’.