“I am deeply saddened to learn of the sudden death of the Chairperson of the CPA Executive Committee, Hon. Emilia Monjowa Lifaka, MP, Deputy Speaker of the National Assembly of Cameroon. As CPA Chairperson, she warmly welcomed me as CPA Secretary-General last year and she worked very closely with the staff at the CPA Headquarters Secretariat who will all mourn her passing.” 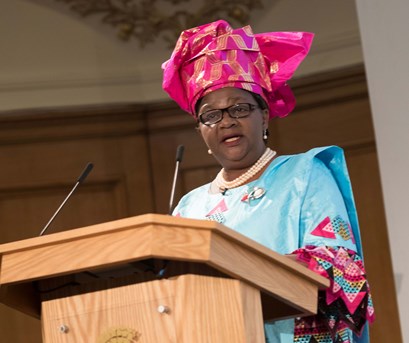 Hon. Emilia Monjowa Lifaka was elected as the Chairperson of the CPA Executive Committee in November 2017 at the 63rd Commonwealth Parliamentary Conference in Dhaka, Bangladesh and had undertaken a wide range of activities for the CPA in governance and parliamentary development. She had previously served as CPA Vice-Chairperson from 2016-2017; CPA Africa Regional Representative from 2015-2017; Conference Coordinator of the 60th Commonwealth Parliamentary Conference held in Cameroon in 2014; and from 2007 to present as the Coordinator of CPA International Activities for the National Assembly of Cameroon.

A member of the CPDM party from Bonjongo, a suburb of Buea, the regional capital of the South West Region of Cameroon, Hon. Emilia Monjowa Lifaka was first elected to the National Assembly in 2002 to represent the constituency of Fako West. In 2009, she was elected as the Deputy Speaker (Vice-President) of the National Assembly of Cameroon, a position that she had held to date. She also held positions on a number of Parliamentary Committees including the Constitutional Laws Committee. In her quest to support young women, she was a mentor to a number of women’s groups and took a particular interest in the training of young women through the Fako West Scholarship Programme.

Our Governance
Learn more about how the CPA is governed