Co-operation, accountability and boundaries: CPA and CLA host webinar on Lawyers, Parliamentarians and the Rule of Law

Parliamentarians and lawyers from across the Commonwealth discussed their respective roles in upholding constitutional democracy and holding governments to account at a recent Commonwealth Parliamentary Association (CPA) webinar. Co-hosted by the CPA and the Commonwealth Lawyers’ Association (CLA) on 27 April 2021, the webinar focussed on the separation of powers between the Executive, the Legislature and the Judiciary. Panellists reflected on the centrality of firm boundaries between the three branches of government to the health of constitutional democracies.

Judge Zak Yacoob, a former Justice of the Constitutional Court of South Africa, explained that, whilst in principle the Executive administers laws, the Legislature passes laws, and the Judiciary interprets laws, the reality is more complex, requiring careful, disciplined monitoring. He said:

"The separation of powers is not a static concept. It is dynamic: it changes from time to time, it changes in context and it changes as time goes on."

The President of the Senate of Antigua and Barbuda, Hon. Alincia Williams-Grant, who is also the Managing Director of a civil law practice, spoke about the difficulties of ensuring clear separation between the Executive and the Legislature in small Parliaments such as Antigua and Barbuda. After the 2014 election, for example, 14 of the 17 Members of the House of Representatives were also appointed to government positions as Cabinet Ministers, creating a significant overlap between the Legislature and the Executive. She said:

“The strict application of the separation of powers is a great challenge, in a practical sense, for the functioning of all constitutional democracies.” 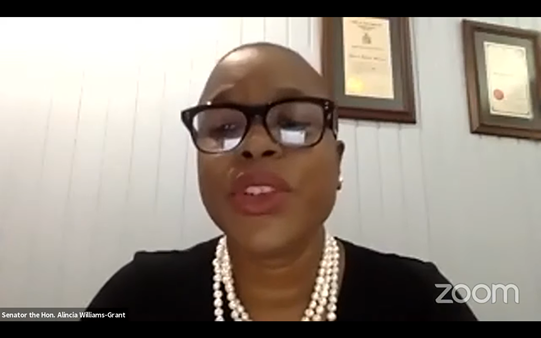 President of the Senate of Antigua and Barbuda, Hon. Alincia-Williams Grant, speaks at the webinar

Oluseun Abimbola, SAN., Chairman of the Section on Legal Practice and a previous Attorney-General of Oyo State, Nigeria, referenced the Commonwealth Latimer House Principles, a set of guidelines that provide an effective framework for the separation of powers in Commonwealth jurisdictions. The CPA and CLA both played a central role in the development of the Principles, which were first endorsed by the Commonwealth Heads of Government in 2003.

The former Attorney-General noted that whilst the constitutions of Commonwealth countries and territories may have incorporated the Principles, it was the responsibility of lawyers to protect them by actively challenging constitutional breaches. He warned that:

“the politics of power creeps into the governance systems to such an extent that it is not uncommon to have elected representatives sacrificing their own independence on the altar of politics.”

The webinar, which was livestreamed on the CPA YouTube channel and is available online, was co-chaired by Brian Speers, President of the Commonwealth Lawyers Association and Emily Davies, Head of Secretary-General’s Private Office at the Commonwealth Parliamentary Association. 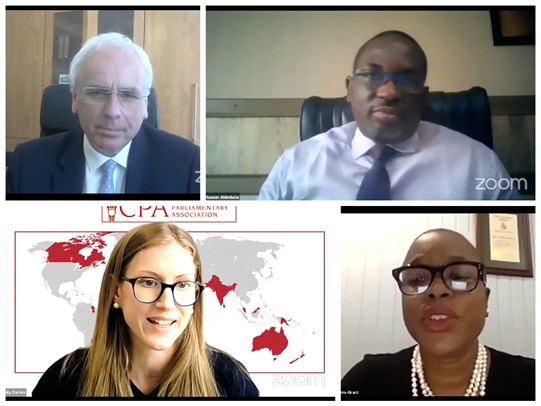 Highlighting importance of democratic processes during the global pandemic

Empowering Parliaments to maintain their independence to function effectively