The Deputy Secretary-General of the Commonwealth Parliamentary Association, Mr Jarvis Matiya, visited the Isle of Man this week to take part in the Annual Tynwald Day celebrations. Mr Matiya joined Members and parliamentary staff of the House of Keys and Legislative Council, dignitaries, the judiciary, the clergy, local campaigners and the general public to celebrate the National Day of the Isle of Man. HRH The Princess Royal presided over this year’s occasion, which saw a return to full proceedings after a scaled back event in 2020 due to the pandemic.

Usually celebrated on 5th July every year, the ancient Tynwald Day has been celebrated for over 1000 years and involves a sitting of the Tynwald (Parliament) that takes place in the Royal Chapel of St John and outside near Tynwald Hill. 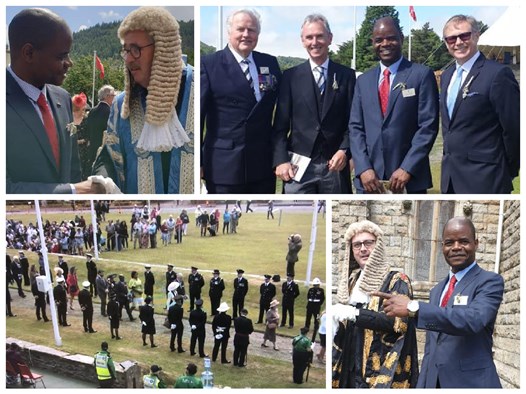 This year’s proceedings included the service in the Royal Chapel of St John, the Tynwald Ceremony attended by His Excellency the Lieutenant Governor of the Isle of Man, Sir Richard Gozney, and the traditional processions to and from Tynwald Hill. At the sitting of the Tynwald, twenty acts were promulgated as per the Isle of Man’s Statutes.

He also had an opportunity to meet with Deputy Speaker, Nigel Evans MP, who was attending the celebrations on behalf of the UK Parliament.

“It is a pleasure to be able to celebrate Tynwald Day with the CPA Isle of Man Branch and others. As my first in-person CPA Branch visit since February 2020, it is excellent to be able to take part in such a special and longstanding tradition of the Commonwealth’s oldest continuous parliamentary body. It is fascinating to see the rich Manx history celebrated in modern life, showcasing principles of openness, democracy and good governance. The interaction and closeness between the legislature (and other branches of government) on one hand and the people on the other is striking.”

The celebrations this year also marked the 140th anniversary of the Tynwald becoming the first national parliament to give women partial suffrage.

For more information about the CPA Isle of Man Branch and the Tynwald/Parliament of Isle of Man please visit www.tynwald.org.im.