The Secretary-General of the Commonwealth Parliamentary Association, Stephen Twigg, has visited Jersey this week to meet the leaders of the States Assembly (the Parliament of Jersey) and attend the 64th Annual General Meeting (AGM) of the CPA Jersey Branch.

Due to COVID-19 travel restrictions, the trip was the first ‘in-person’ visit that the CPA Secretary-General has been able to undertake since assuming the position on 1 August 2020. During the visit, which took place from 28-30 June 2021, the CPA Secretary-General watched proceedings at the States Assembly in Jersey’s capital St Helier, met with the Bailiff, Timothy Le Cocq, and the Chief Minister, Senator John Le Fondré, and attended a number of meetings with parliamentary leaders to discuss ongoing CPA and Commonwealth engagement with the Branch. The CPA Secretary-General also met with Jersey’s External Relations Minister, Senator Ian Gorst and the Jersey Overseas Aid Office. 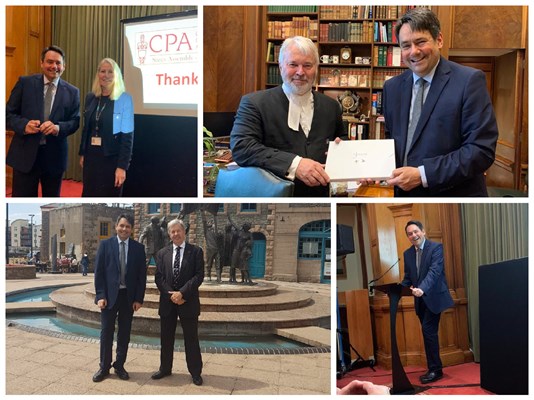 Above: The CPA Secretary-General during his visit to Jersey - click here for images album.

The CPA Secretary-General commented: “The CPA provides a wealth of opportunities for Members to build strong relationships with, and learn from, other Commonwealth jurisdictions in the promotion of parliamentary democracy. Being a member of the CPA and our Small Branches network presents a unique opportunity for Jersey to connect with the smallest jurisdictions in the Commonwealth that may face similar issues and opportunities. I was very pleased to undertake my first physical visit as CPA Secretary-General to the States Assembly and CPA Jersey Branch, at a particularly pertinent time as we celebrated International Day of Parliamentarism on 30th June. I enjoyed meeting with Jersey States Members during my visit and learning from their perspectives.”

The CPA Jersey Branch AGM took place at the States Assembly and was attended by Members of the CPA Jersey Branch. At the reception event, the CPA Secretary-General spoke to attendees about the opportunities for knowledge sharing and mutual learning between Commonwealth Parliaments offered by the CPA, particularly small jurisdictions that often face common challenges.

Deputy Greffier of the States Assembly, Lisa Hart, spoke at the AGM about Jersey attending the Commonwealth Women Parliamentarians British Islands and Mediterranean Regional Conference in the Falklands Islands last year and Ben Markwell-Sales and Kaya Camara, two youth citizens of Jersey, also spoke to attendees about their experience at the recent Virtual Commonwealth Youth Parliament, organised by the CPA in December 2020.

The Chair of the CPA Jersey Branch Executive Committee, Deputy Carolyn Labey, who gave the welcome at the AGM, said, “The CPA provides fantastic opportunities to share ideas and discuss best practices on the global stage. Jersey benefits hugely from its close links with the Commonwealth, and I am proud to lead the Island’s work in this field. Jersey is an active contributor to the CPA and achieves recognition for our efforts. I am looking forward to showcasing more of our Island’s achievements and learning from others in the year to come.”

For more information about the CPA Jersey Branch and the States Assembly please visit https://statesassembly.gov.je.