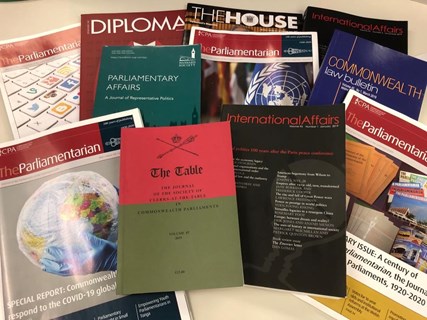 Here, we look at some of the leading journals in the field:

The Round Table
One of the first international relations journals to be published was The Round Table, which first appeared in 1910 with the subtitle ‘A Quarterly Review of the Politics of the British Empire’. In its early days, the publication provided ‘informed analysis of wider aspects of colonial and imperial affairs, and of international relations more generally’.

As the publication transformed into the Commonwealth Journal of International Affairs, it became a Journal for the exchange of opinions and analysis throughout the ‘modern’ Commonwealth and today, The Round Table’s interest in policy matters has ensured that the worlds of journalism, politics, administration and business are represented among both writers and readers of the Journal. Six issues of the journal are published each year.

Since its founding, Chatham House has brought together academics, policymakers and others wanting to debate the international issues of the time. The journal has reflected this founding principle and International Affairs still aims to engage with both an academic and practitioner readership. Starting with three issues in 1922, it now appears six times a year. Contributors have included a number of Nobel Prize winners, prominent political leaders and researchers with relevance to both scholars and policymakers. The global issues of war, health, politics and the role of great powers have all been recurring themes in the journal which continue today.

The Table
The Table is the annual Journal of the Society of Clerks-at-the-Table (SOCATT) in Commonwealth Parliaments, first published in 1932, and it contains summaries of activities from Parliaments throughout the Commonwealth as well as articles of interest on a wide variety of issues related to the parliamentary process. The journal is of particular interest to parliamentary clerks and parliamentary staff.

The Society was founded in 1932 by Owen Clough, a former Clerk of the Senate of South Africa and the first CPA South African Branch Secretary. From the beginning, the object of the Society was to provide a means by which parliamentary officials could share knowledge of the practices and procedures of the various Legislatures of the Commonwealth.

As well as covering major issues in international relations, the magazine contains book, film and museum reviews from around the world. The magazine is sent to decision-makers, major embassies, policymakers, the media, and the academic world.

Parliamentary Affairs
Parliamentary Affairs is a peer-reviewed journal covering all aspects of representation and politics connected to the institution of Parliament. The journal is published in partnership with the Hansard Society in the UK, created to promote parliamentary democracy throughout the world.

Established in 1947, Parliamentary Affairs has a distinguished record of linking the theory and conduct of Parliament and politics. The journal offers rigorous examinations of a wide range of Parliaments and political processes, which are both of academic interest and policy relevance. It also aims to publish diverse and comparative research.

Jeffrey Hyland is the Editor of The Parliamentarian, the CPA’s Journal of Commonwealth Parliaments.

For further information about the publication or to suggest a feature article please email editor@cpahq.org.

The Parliamentarian 2022: Issue One: Reflecting on two years of the COVID-19 pandemic

This digital edition of The Parliamentarian reflects on two years of the COVID-19 pandemic and asks how Commonwealth Parliaments have delivered parliamentary democracy during the pandemic?

This issue features articles from Commonwealth Speakers, MPs and parliamentary officials from Canada, India, UK, Pakistan, Uganda as well as global experts and international organisations. This issue looks at the governmental changes in St Helena, the appointment of the first Aboriginal Liaison Officer in New South Wales, the importance of intra-Commonwealth trade and a case study on gender equality from the Swedish Parliament.

This issue of The Parliamentarian also features a series of Commonwealth Youth Voices articles on a wide range of topics by young citizens from Gibraltar, Wales, UK, Antigua and Barbuda, St Vincent and the Grenadines, Barbados, Belize and Pakistan.

This commemorative book features more than 180 Commonwealth Parliaments and Legislatures at national, state, provincial and territorial level amongst the CPA’s membership and includes information about each Parliament, as well as over 350 photographs of their buildings and chambers. Click here to find out how to purchase a copy.

The CPA's Head of Programmes Matthew Salik provided oral and written evidence to the Parliament of Australia’s Joint Select Committee on Parliamentary Standards.

Tributes to Her Majesty Queen Elizabeth II from Commonwealth Parliaments

Commonwealth Parliaments reflect on the life and service of Her Majesty Queen Elizabeth II, the CPA Patron and Head of the Commonwealth.