In November 2021, a team from the CPA Headquarters Secretariat visited Belize to provide technical assistance for parliamentary strengthening centred on four key areas: procedure, administration, outreach and induction. This working visit was in fulfilment of a Memorandum of Understanding signed between the Commonwealth Parliamentary Association (CPA) and the National Assembly of Belize. The CPA is supporting the National Assembly in building, maintaining, and safeguarding a stronger, more resilient, gender sensitive and inclusive Parliament.

The Speaker of the House of Representatives in Belize, Hon. Valerie Woods, and the President of the Senate, Hon. Carolyn Trench-Sandiford, both provided welcome remarks for the day’s session.

The Speaker highlighted the importance of greater involvement of women in governance and in providing leadership for a more gender-sensitive Parliament. Currently, in the House of Representatives, women occupy four of 31 elected seats (13%); and in the Senate women occupy four of the 13 appointed seats (30%). The Speaker underscored the importance of equal opportunities for women and men to participate in the decision-making processes, noting that greater equity in leadership was a matter of fundamental human rights. 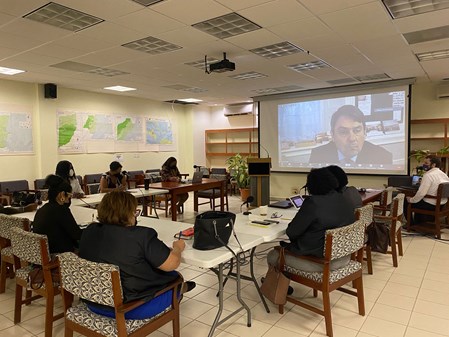 Hon. Valerie Woods also spoke about the National Assembly’s ongoing efforts to encourage a more open Parliament as the bedrock to ensuring greater involvement of women in governance and the wider involvement of the general populace. Initiatives such as drafting a Code of Conduct for Parliamentarians, revising the Standing Orders for the House and the Senate, establishing a new Joint Public Accounts Committee, and building public information platforms across all forms of media are necessary for the strengthening of the National Assembly as an institution.

The CPA is developing an online course to address the significance of women's parliamentary caucuses, their distinctive attributes, and how they can amplify the role and impact of women in political and parliamentary decision-making. The course is part of the expansion of the CPA Parliamentary Academy, our free online learning platform for CPA Members.

Register for the Academy ->

The President of the Senate, Hon. Carolyn Trench-Sandiford, outlined the role of empowered women in the shaping of a more robust democracy. She underscored that the empowerment of women contributes to the advancement of all facets of society. She urged that, as women Parliamentarians, more definitive action was required to develop a clear set of shared goals and objectives in meeting our targets for gender equity in governance. Pointing to the fact that you “can’t be what you can’t see”, Hon. Trench-Sandiford also noted the need for shifts in parliamentary culture. 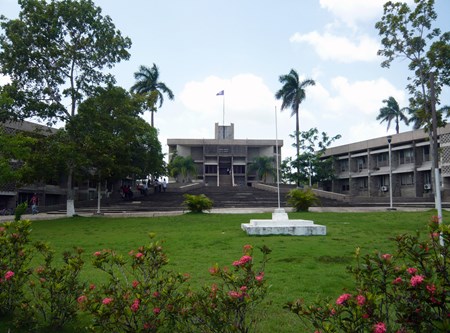 Above: The exterior of the National Assembly of Belize in Belmopan

The Roundtable sought to provide a clear road map for filling the gaps and to provide a framework for a more gender-sensitive Parliament. Thematic areas explored included:

These sessions were followed by a comprehensive discussion by the Women’s Caucus on the imperative for public engagement in the building of a more inclusive democracy that seeks to meaningfully involve all relevant stakeholders and the wider citizenry. The Women’s Parliamentary Caucus was able to examine what is working, what is not working, and what strategies can be utilised by the National Assembly in meeting its obligations for representation, scrutiny, and oversight.

Commonwealth Women Parliamentarians from the Legislative Assembly of British Columbia and the Parliament of Canada, respectively, shared their own experiences in achieving these outcomes whilst also noting that there was still work to do and steps to take on their gender-sensitisation journeys.

During their working visit to Belize, the CPA Headquarters Secretariat team met with leaders within the National Assembly to discuss ongoing parliamentary strengthening initiatives in the country, which the CPA is supporting through a Technical Assistance Programme. They also observed the Belize Children’s Parliament (modelled on similar Youth Parliaments in Commonwealth jurisdictions), hosted in the main Chamber, which gives young people across Belize the opportunity to voice their concerns, debate and experience parliamentary democracy in action.

Read the outcomes report from the three-day CPA Post-Election Seminar for National Assembly of Belize held between 3 to 7 May 2021.