In an address to attendees at the Commonwealth Lawyers Conference 2021 in Nassau, The Bahamas, the CPA Secretary-General, Stephen Twigg, spoke about the need to safeguard the separation of powers amidst the increased use of emergency measures during the COVID-19 pandemic.

The CPA Secretary-General, chairing a session on the effects of emergency measures on the separation of powers with the Lord Chief Justice of Northern Ireland, Sir Declan Morgan QC, and the Attorney-General of Jamaica, Hon. Marlene Malahoo Forte, said that Parliamentarians, lawyers and experts must carefully scrutinise whether:

‘the scale, the form and content of these emergency measures were fit for purpose’. 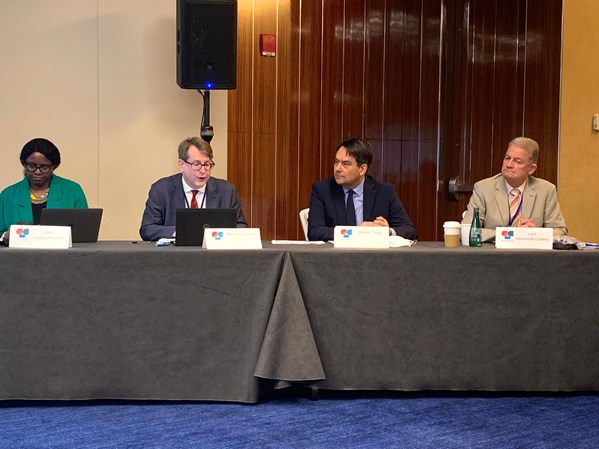 Above: The CPA Secretary General (2nd from right) participating in the panel session on emergency measures and the separation of powers. To view further images from the event please click here.

The onset of the COVID-19 pandemic triggered the adoption of emergency measures across the world as governments acted to slow the spread of the virus. Whilst fast and extensive restrictions were necessary to protect public health systems and save lives, the subsequent decrease in transparency and accountability placed great strain on the core democratic principle of the separation of powers.

Noting the potential for power imbalances between the three pillars of the rule of law during an emergency, the CPA Secretary-General warned that:

‘Parliaments can be at a significant disadvantage when compared to the position of governments.’

He emphasised that Parliamentarians must remain vigilant during a crisis to protect the independence of Parliament and highlighted that the Commonwealth Latimer House Principles on the separation of powers provide an important framework for good governance and democracy.

The Conference, hosted annually by the Commonwealth Lawyers Association, took place from 5 – 9 September 2021 at the Baha Mar Grand Hyatt Convention Centre in Nassau. The overall theme was ‘Sustainable Justice: The future of the role of law’, with legal practitioners, politicians, academics and experts from across the Commonwealth attending to discuss issues in the profession and share ideas. Each day featured a plenary session followed by workshops and panels split across three ‘event streams.’ On the second day of the Conference, the CPA Secretary-General also chaired a session on ‘Judicial oversight and accountability: the rise of the watchdog.’

The Commonwealth Secretary-General, Rt Hon. Patricia Scotland QC, spoke at the opening plenary session, alongside Brian Speers, President of the Commonwealth Lawyers Association, about why climate rights must be treated as essential human rights.

Whilst in The Bahamas, the CPA Secretary-General also held meetings with some of the country’s parliamentary and civil society leaders, including Matthew Aubry, President of the Organisation for Responsible Governance, and Anthony Hamilton, President of Civil Society Bahamas. He heard from them about the interaction between Parliament and civil society in The Bahamas, how their organisations contribute to the upkeep of Bahamian democracy, and the ways in which the CPA can support this. The CPA Secretary-General also met with the President of the Senate, the Speaker and the Clerk of the House of Assembly of The Bahamas during his visit.

The Commonwealth Parliamentary Association (CPA) has developed a Model Law for Independent Parliaments to help empower Parliaments to take control away from the Executive to ensure it has the administrative, operational and financial resources it needs to function effectively.