The Secretary-General of the Commonwealth Parliamentary Association (CPA), Stephen Twigg, visited the Turks and Caicos Islands to meet Members and officials of the House of Assembly and CPA Turks and Caicos Branch.

During the visit, which took place from 11 – 15 September 2021, the CPA Secretary-General met with the Premier of Turks and Caicos, Hon. Charles Washington Misick; the Speaker of the House of Assembly and CPA International Executive Committee Member for the Caribbean, Americas and Atlantic Region, Hon. Gordon Burton, MP; Leader of the Opposition, Hon. Edwin A. Astwood, MP; Minister of Infrastructure, Housing, Planning & Development, Hon. Akierra Missick, MP; and the island’s Governor, His Excellency Nigel Dakin CMG. 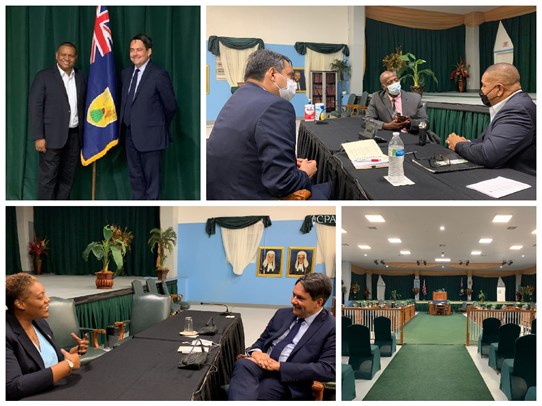 The CPA Secretary-General meeting Members of the House of Assembly in Turks and Caicos. To view further images from the visit please click here.

The meetings provided an opportunity to discuss recent events in the Turks and Caicos, including the election held in February 2021 where several Members of the House of Assembly were either newly elected or appointed (including the Speaker and Attorney-General).

“I am extremely pleased to be able to visit the CPA Caribbean, Americas and Atlantic Region and make my first international visit to the House of Assembly of Turks and Caicos. The CPA Branch has shown first-hand how a jurisdiction can successfully conduct an election during the COVID-19 pandemic, and their experience has provided a wealth of best practice for Members to learn from one another in the promotion of parliamentary democracy. I was very pleased to undertake this visit at a particularly pertinent time as we celebrated International Day of Democracy on 15 September. I greatly enjoyed meeting with House of Assembly Members during my visit and learning from their perspectives.”

During his visit, the CPA Secretary-General attended the CPA Turks and Caicos Branch meeting during which newly elected and appointed Members participated in a question-and-answer session to learn about the CPA and the support provided to Members and parliamentary staff. This included discussions on the new CPA Parliamentary Academy and assessments against the CPA’s Benchmarks for Democratic Legislatures, as well as ongoing CPA and Commonwealth engagement with the Branch and further opportunities for participation by Members and parliamentary staff.

The CPA Secretary-General, alongside the Minister for Education, Hon. Rachel Taylor, MP was also able to visit the school where the temporary Parliament is being held while the main Assembly building, that sustained damage during Hurricane Irma, is being restored.

Turks and Caicos is an archipelago of 40 coral islands in the northern Caribbean and is a UK Overseas Territory. The CPA is the only Commonwealth body that works to strengthen Legislatures at national, state, provincial and territorial level and provides a platform to develop good parliamentary practice within the UK Overseas Territories and to share best practice with other similar Legislatures across the Commonwealth.

Video Interview | Election campaigning during a pandemic: positives, negatives and lessons in Turks and Caicos

During his recent visit to the Turks and Caicos Islands, the CPA Secretary-General Stephen Twigg spoke to Hon. Akierra Missick, Minister for Physical Planning and Infrastructure Development, about her recent experience of election campaigning during the pandemic.

About Us
Learn more about the people in our organisation, how we're governed and our history
CAA Region
Learn more about our Caribbean, Americas and the Atlantic Region
CPA Small Branches
Empowering small Parliaments and Legislatures to tackle big challenges.
Blogs
Find policy case studies, resource collections, interviews and personal reflections from Parliamentarians and parliamentary staff across the Commonwealth