Members of the National Assembly of Belize have completed the Commonwealth Parliamentary Association (CPA) Post-Election Seminar, designed to strengthen their understanding of parliamentary democracy and provide an insight into leading democratic practices from around the Commonwealth.

The programme took place over three days from 3 to 7 May 2021 and was attended by Members of the House of Representatives and the Senate. The virtual sessions, co-ordinated by the CPA, featured presentations by a roster of Parliamentarians, clerks and experts from across the Commonwealth, who shared their knowledge, experience and examples of best practice with new and returning Parliamentarians in Belize.

2021 marks 40 years since Belize gained independence and signed a new constitution, which expanded the House of Representatives and increased elected terms of office to five years.

Hon. Valerie Woods MP, Speaker of the House of Representatives of Belize said:

“Belize's new Parliament: House and Senate, Government Members, Opposition and social partners, have a golden opportunity to set the stage for how we wish the next 40 years to unfold and provide an example for the youth and leaders of the future. The fault will only lie in ourselves if we do not seize this chance to make our parliamentary system work better for Members and the people of Belize." 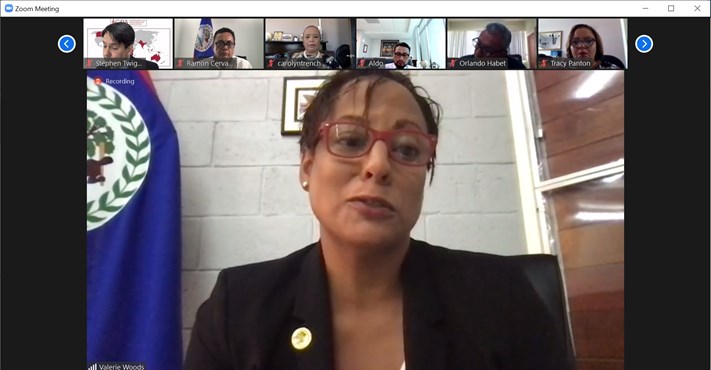 Above: Hon. Valerie Woods MP, Speaker of the House of Representatives of Belize, speaks at the opening ceremony

The CPA Post-Election seminar was organised following national elections held on 11 November 2020 and forms part of a wider stream of work taking place between the National Assembly of Belize and the CPA. The National Assembly has agreed to a long-term commitment of parliamentary strengthening activities under the umbrella of a CPA Technical Assistance Programme. This seminar is the second of those activities and will be followed by the development of a parliamentary Code of Conduct.

The programme offers an opportunity for parliamentary leaders to identify benchmarks of good governance.

Commenting on the contribution of the seminar to the process of democratic renewal in Belize, Hon. Carolyn Trench Sandiford, President of the Senate, said,

"The CPA seminar was timely as, 40 years post our independence, Belizeans are now, more than ever, demanding better governance, of which the law-making and oversight role of Parliament is crucial. In addition, and without a doubt, this seminar provided an ideal platform for a new generation of Parliamentarians and thought leaders to begin to conceptualize the architecture of the kind of Parliament needed to respond to these demands and that of the next generation.” 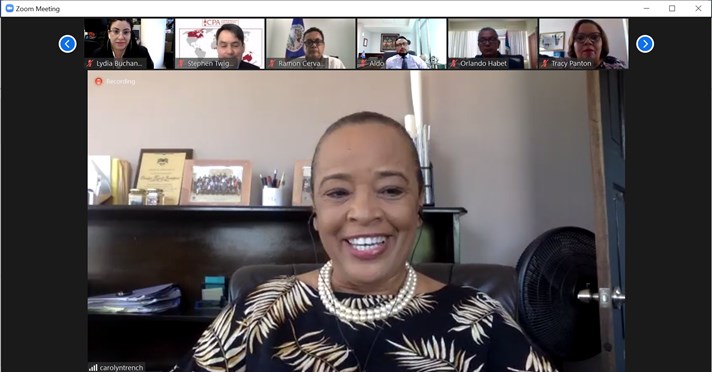 Above: Hon. Carolyn Trench Sandiford, President of the Senate, addresses Members of the National Assembly

Each session of the seminar examined a different aspect of parliamentary democracy, starting with an open discussion on the opportunities and challenges that elected representatives face each day and concluding with a forward-looking session on the potential impact of new technology on the operation of Parliaments, particularly in the context of COVID-19.

Hon. Tracy Panton MP, a Member of the House of Representatives, said,

“The CPA Post-Election Seminar was instructive, informative, impactful. The sessions were thought-provoking, provided an opportunity for constructive dialogue and brought in sharp focus the roles, responsibilities and functions we have a duty to assume as Parliamentarians.”

The CPA Secretary-General Stephen Twigg, who spoke at the opening and closing ceremonies, said:

Above: Women Presiding Officers and Speakers from the CPA Caribbean, Americas and the Atlantic Region met virtually in the margins of the CPA Post-Election Seminar representing Belize, Trinidad and Tobago, Antigua and Barbuda, St Lucia, Montserrat and St Vincent and the Grenadines.

The CPA Post-Election Seminar introduces Parliamentarians to differing legislative systems and methods of working. The programme also serves as a reminder of the possibilities that can come from sharing knowledge across the Parliaments and Legislatures of the Commonwealth to strengthen democratic governance.

Read the outcomes report from the three-day CPA Post-Election Seminar for National Assembly of Belize held between 3 to 7 May 2021.