The virtual launch was convened by Hon. Solomon L. Tsenoli MP, Deputy Speaker of the National Assembly of South Africa, who is also a representative of the CPA Africa Region on the International CPA Executive Committee.

“Our overall purpose is to build an informed parliamentary community that is able to contribute to deepening the Commonwealth’s democratic commitments and to further cooperation amongst its Parliaments and Legislatures.” To read the opening remarks in full please click here. 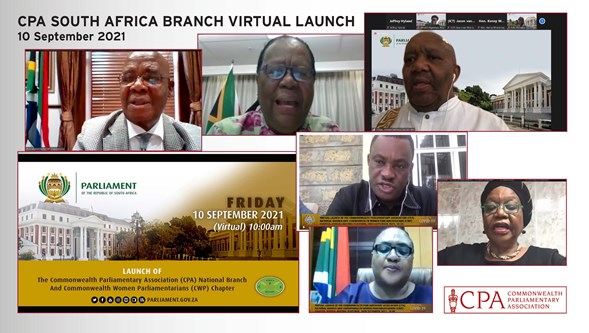 • Hon. Dr Grace Naledi M. Pandor MP, Minister of International Relations and Cooperation, who spoke about the role of South Africa in multilateralism, with a specific emphasis on the engagement of both the Legislature and the Executive with different Commonwealth structures including the CPA.

• The Chairperson of the CPA Africa Region, Rt Hon. Justin B. Muturi EGH MP, Speaker of the National Assembly of the Parliament of Kenya, joined the event by video link and highlighted the progress made in transforming the CPA both internationally and across the wider Region.

• Hon. Angela Thoko Didiza MP, Minister of Agriculture and Land Reform and former Chairperson of the CWP Africa Region, gave her reflections on the role of South Africa in the wider CWP.

At the meeting, Adv M. E. Phindela, Secretary to the National Council of Provinces of South Africa, was endorsed as the CPA South Africa Branch Secretary.

South Africa was one of the six original founding Members of the now Commonwealth Parliamentary Association in 1911. The CPA South Africa Branch was first established in 1912 and later re-joined the CPA in January 1995 following a period of absence.

More than 50 Speakers, Members of Parliaments, Clerks and parliamentary officials attended the Conference in Belfast, Northern Ireland from 21-22 September 2021

The Commonwealth Parliamentary Association has joined with international partners led by GLOBE International to facilitate the engagement of parliamentary networks and Parliamentarians at the forthcoming COP26 and UNFCCC meetings.

Following a virtual meeting of the Regional Champions of the Commonwealth Parliamentarians with Disabilities (CPwD) network, Hon. Dennitah Ghati MP from the National Assembly of Kenya has been announced as the new CPwD Chairperson.