New and returning MPs and Senators participated in the virtual programme over the course of three days, held between 22 February to 1 March 2021. The sessions, co-ordinated by the CPA, examined many aspects of parliamentary democracy, from engaging with constituents to financial oversight of the Executive. Panellists for the seminar included parliamentary colleagues from nine other Commonwealth Parliaments and experts from leading international organisations, including the United Nations, BBC and the Commonwealth Foundation.

The responsibilities of a Member of Parliament are wide-ranging and they are often subject to competing pressures from the public , varied interest groups, opposition parties and the government. Throughout the seminar, colleagues from across the Commonwealth offered their advice and ideas on how to deal with these pressures and be an effective Parliamentarian.

Advice highlights included the importance of parliamentary staff in supporting Parliamentarians , the need to identify patterns in constituency casework that can inform the way Members legislate, and the importance of cross party collaboration to counteract the perception of politics as a ‘blood sport’. 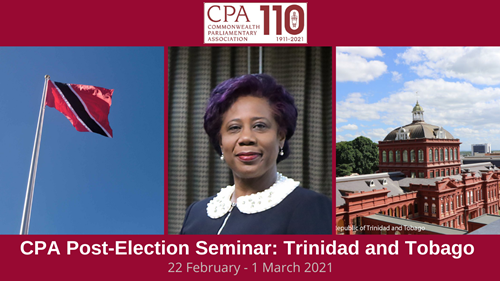 Hon. Bridgid Annisette-George, MP, Speaker of the House of Representatives of Trinidad and Tobago, added,

“The CPA Post-Election Seminar provided an invaluable forum for our Parliamentarians to discuss various elements of parliamentary practice and procedure while simultaneously gaining the perspective of their colleagues from the Commonwealth family. This exchange supported our realization, that although the demands of parliamentary democracy are great and even overwhelming at times, the established parliamentary procedures and practices, if appropriately applied, can facilitate the discharge of our mandate in providing, good, effective, accountable, transparent and inclusive governance, to our citizens.”

“The Commonwealth Parliamentary Association is delighted to support the Parliament of the Republic of Trinidad and Tobago through our Post-Election Seminar programme. This virtual seminar offered a rare opportunity for the 73 Members of Parliament in the current cohort to come together as one, to consider how democracy on the islands can be further strengthened and to learn from the experiences of their parliamentary colleagues elsewhere in the Commonwealth.”

The CPA Post-Election seminar programme provides Members with a comprehensive knowledge of parliamentary process and the responsibilities of an MP. The programme also serves as a reminder of the possibilities that can come from sharing knowledge across the Parliaments and Legislatures of the Commonwealth to strengthen democratic governance.

Outcomes Report: CPA Post-Election Seminar for the Parliament of Trinidad and Tobago

The three-day CPA Post-Election Seminar for the Parliament of Trinidad and Tobago held between 22 February to 1 March 2021 resulted in a number of outcomes including:

Please find below a link to the report.

The outcomes report of the three-day CPA Post-Election Seminar for the Parliament of Trinidad and Tobago held between 22 February to 1 March 2021.