The Commonwealth Women Parliamentarians (CWP) network switched its attention to focus on CPA Branches within the Australia Region as it hosted the fifth of a series of virtual roundtables on gender sensitive Parliaments today.

Attended by both male and female Parliamentarians and parliamentary staff from Branches in the CPA Australia Region, discussions highlighted the need for Commonwealth Parliaments to establish effective practices that are both gender sensitive and inclusive. Discussions also addressed how Parliaments can translate the CWP Guidelines into practical practices necessary for change. 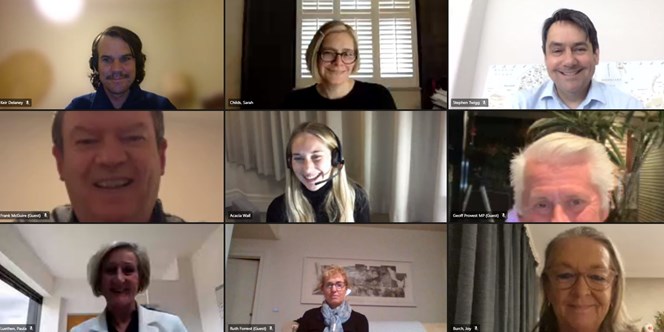 ‘today’s virtual roundtable is an opportunity for our Region to collectively learn about the issue of gender sensitivity and the CWP Guidelines and look at ways we might be able to adapt and adopt these in the future, particularly in places where practices may not exists’.

Hon. McGuire continued by highlighting the work the Parliament of Victoria is doing to ensure gender equality and that in 2019, it was the first Parliament in Australia to pass the Gender Equality Bill. In addition, the CPA Victoria Branch is currently working on producing a Code of Conduct for Parliamentarians.

During her presentation, Sarah Childs, Professor of Gender and Politics at the Royal Holloway University of London and author of the ‘Gender Sensitising Parliaments Guidelines’ on behalf of the CWP, stressed that

‘the pandemic makes the process of gender sensitisation more important’ and that ‘the possibilities of dealing with a pandemic cannot be separated from a gender sensitive Parliament because if you fail on the gender sensitivity of a Parliament you are not going to respond adequately to the differently gendered experiences of citizens and those who need to be supported’.

Professor Childs concluded her presentation by encouraging all CPA Branches to take full advantage of the opportunity made available by the CWP network to undergo a gender sensitive review and benefit from other forms of support to help their Parliament uphold the standards stated in the Guidelines.

The CWP roundtable forms part of a series of virtual Regional discussions that will be delivered for all nine Regions of the CPA. The roundtables are seeking to facilitate a united Commonwealth approach to increasing the number of gender sensitive Parliaments across the Commonwealth.
The programme builds upon the recent CWP Gender Sensitising Parliaments Guidelines: Standards and a Checklist for Parliamentary Change that was successfully launched in October 2020. These guidelines provide an outline of gender sensitising standards which Commonwealth Parliaments can use as a benchmark to achieve.
For more information about how your Region can participate in a CWP Roundtable: Gender Sensitive Parliaments in the 21st century virtual roundtable discussion and for future dates, please contact CWP Network Coordinator, Ms Bénite Dibateza at benite.dibateza@cpahq.org.