The Parliamentarians and parliamentary staff from the CPA India Region agreed on the need for increased gender sensitivity and inclusivity within their Parliaments and discussed their existing ambitions and the various challenges to progress.

In her opening remarks, CWP Steering Committee Member for the India Region and Member of the Lok Sabha, Smt. Sunita Duggal underlined the record number of women Parliamentarians in the current Lok Sabha (79 women or 14.63%), and the high number of women leaders in local government as well as a wide range of other sectors in India, including in engineering, science and technology. In addition, she highlighted that India has seen a paradigm shift in moving away from talking about women’s development and towards ‘women-led development’. 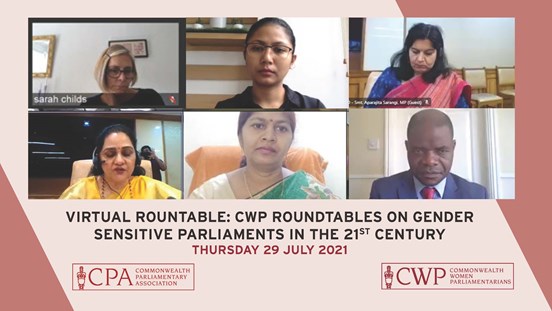 The forum also gave attendees the opportunity to hear from Dr Sarah Childs, Professor of Gender and Politics at Royal Holloway University of London, and the author of the CWP Gender Sensitising Parliaments Guidelines: Standards and a Checklist for Parliamentary Change, on the various possible implementation strategies for adopting gender sensitive practices in their respective Parliaments.

Women Parliamentarians from the CPA India Region also highlighted some of the challenges that women across the region face that hinder their ability to be effective and successful women in Parliament.

For more information about how your Region can participate in a CWP roundtable discussion please contact the CWP Network Coordinator at benite.dibateza@cpahq.org.