What will your Parliament look like in the next 110 years? In celebration of the CPA's 110th anniversary, we're hosting a creativity competition for under-18s.
Find out more

Youth engagement is central to the values of the CPA. Our work includes the Commonwealth Youth Parliament (CYP), development of educational resources and outreach programmes. These programmes aim to increase awareness of the important work done by the CPA in promoting democratic governance across the Commonwealth and to connect parliamentarians with young people in schools, colleges and universities to inspire the next generation of young leaders.

Young citizens from across the Commonwealth participated in a week-long Commonwealth Youth Parliament which took place from 14-18 December 2020 and was held virtually for the first time. The virtual format allowed young people from all 9 CPA regions to connect across a remarkable 17 time zones. In total, 59 delegates representing 32 different Commonwealth Parliaments participated in a range of parliamentary activities. Delegates, aged 18-29, were nominated to attend the event by their national or subnational Parliament.

Youth delegates acted as Members of Parliament for the fictional jurisdiction of ‘Commonwealthland’. They were split into two political parties, with a third group of independent Members. The central issue of the week was a mock Bill proposing a new COVID-19 Youth Relief Fund and a Statistical Bureau for Youth Unemployment. Sessions were designed to replicate real parliamentary processes and included intra-party meetings, Prime Minister’s Questions, Committee hearings, a debate on the Bill and a mock press conference.

Some of the youngest current Parliamentarians in the Commonwealth acted as Speakers for the Commonwealth Youth Parliament, ruling over the House and moderating debates. The three Speakers for the week were Lord Fakafanua, the youngest ever Speaker of the Legislative Assembly of Tonga; Senator Jordon Steele-John, the youngest current Member of the Senate of Australia; and Hon. Sharie De Castro, a Member of the House of Assembly of the British Virgin Islands and a prominent youth activist. 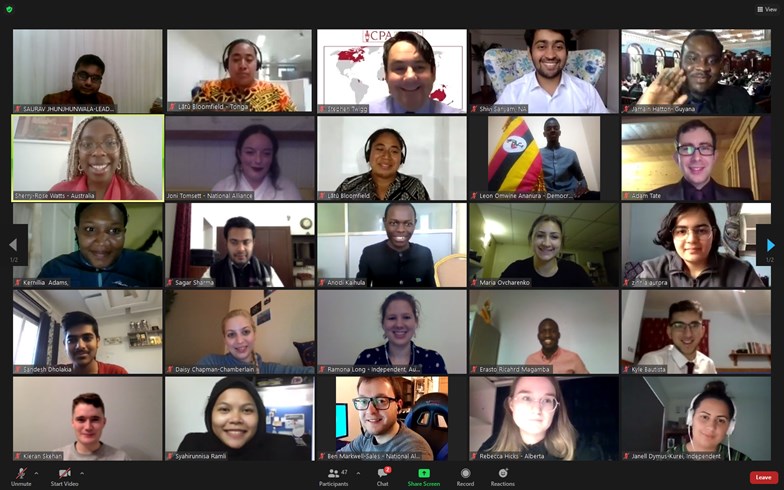 The CPA also partnered with leading international and Commonwealth organisations to provide expert witnesses for the Committee sessions of the Parliament. These sessions were an opportunity for the young Parliamentarians to scrutinise a Bill in detail and receive evidence from external specialists. Drew Gardiner, from the International Labour Organisation; Taofeekat Adigun, from the Commonwealth Youth Gender and Equality Network; and Dr David Strain, from the Commonwealth Medical Association, fielded questions from delegates on issues relating to social affairs, employment and health.

At the opening session of the week, Dr Arjoon Suddhoo, Commonwealth Deputy Secretary-General, and Lord Fakafanua spoke alongside CPA Secretary-General Stephen Twigg. Dr Suddhoo challenged delegates to “be bold and be different” and to “create the kind of parliament you would like to see in the future”, whilst Lord Fakafanua urged participants to “seize opportunities to represent your community.”

Lātū Bloomfield, who represented the Parliament of Tonga at the Commonwealth Youth Parliament and was chosen by her fellow delegates to act as Prime Minister of ‘Commonwealthland’, thanked the CPA and praised the attitude of her peers throughout the week, saying “I have gained many new friendships and it has been great to see the harmony and unity of delegates, regardless of the political party they represented.”

The 10th CYP was opened by the Speaker of the Lok Sabha, Om Birla, MP and the Chairperson of the CPA, Hon. Emilia Monjowa Lifaka, MP. The event was attended by 47 young people from 13 countries across the Commonwealth. The 4 days of the CYP provided a key development opportunity for young people from the Commonwealth with ambitions of public office and introduced these potential young Parliamentarians to the fundamentals behind the processes of Parliament. Participants experienced Parliament in a real-life situation in the Legislative Assembly of Delhi’s chamber. The programme also included taking part in parliamentary procedures, debating legislation and motions in relation to the fictional ‘Commonwealthland’.

The 10th Commonwealth Youth Parliament gave participants a pan-Commonwealth experience and a hugely valuable networking opportunity with current young Members of Parliament from the Commonwealth who acted as mentors – Hon. Fasiha Hassan, MPL from the Gauteng Provincial Legislature in South Africa who also acted as the Speaker of the 10th CYP and Hon. Travis Robinson, MP from The Bahamas Parliament.

The 9th CYP was hosted by the Jersey States Assembly in St Helier, Jersey. The 49 delegates at the 9th CYP came from fifteen countries, ranging from the largest (India) to the smallest (Niue), and from 35 CPA Branches across 8 CPA Regions. The five days of the CYP provided a key development opportunity for young people from the Commonwealth with ambitions of public office and introduced these potential young Parliamentarians to the fundamentals behind the processes of Parliament.

In a notable departure from previous years, the 9th CYP, in recognition of the non-party system in the States Assembly in Jersey, saw youth participants acting as the Government, Opposition and independents sitting together, allowing for a wider sharing of opinions and engagement in debates. Participants experienced parliament in a real-life situation in the legislative chamber. The programme also included taking part in parliamentary procedures, debating legislation and motions in relation to the fictional ‘Commonwealthland’.

Many of the sessions were presided over by CPA Jersey Chairperson, Connetable Len Norman from the States Assembly of Jersey and the States Assembly staff ensured the smooth running of parliamentary procedures. The CYP delegates also faced the media in a ‘mock’ press conference with questions from local journalists including Andy Sibcy of the Jersey Evening Post and Clare Burton from ITV Channel Islands News. Delegates at the CYP9 were entertained at a dinner hosted by Highlands College, a leading Further Education College in Jersey, with chef and hospitality students and lecturers providing the excellent food and service. 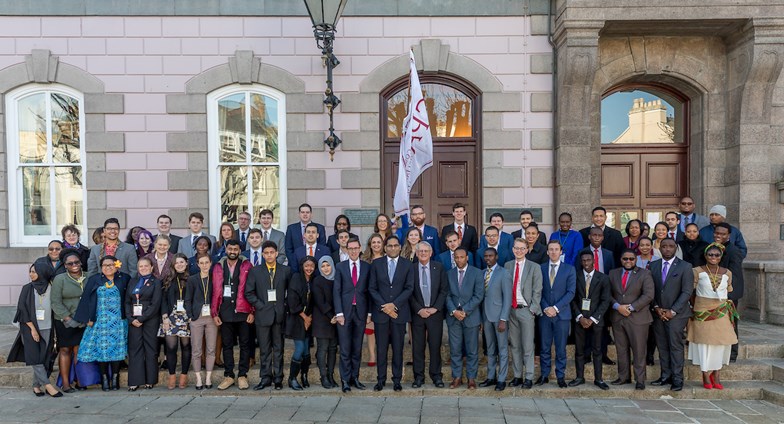 The 8th CYP was hosted by the Legislative Assembly of British Columbia. In a colourful opening ceremony in the Legislative Chamber at the Parliament Buildings in Victoria, over 60 young participants representing CPA Branches in eight of the nine CPA Regions – Africa; Asia; Australia; British Islands and Mediterranean; Caribbean, Americas and Atlantic; Canada; India; Pacific – came together for the start of a week long programme of events.

The 8th Commonwealth Youth Parliament (CYP8) was opened by Mr. Akbar Khan, Secretary-General of the Commonwealth Parliamentary Association and saw addresses by Hon. Linda Reid MLA, the Speaker of the Legislative Assembly of British Columbia and Mr Craig James, the Clerk of the Legislative Assembly of British Columbia. The opening ceremony also featured a blessing from Elder Mary Ann Thomas and a poetry reading from Zoe Duhaime. 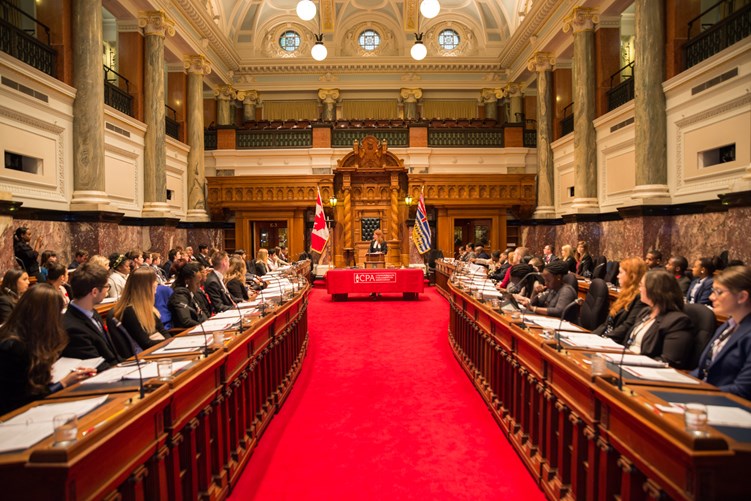 The 7th CYP was hosted by the Legislative Assembly of the Northern Territory in Darwin, Australia. This CYP brought together delegates from Australia, Canada, India, Asia, the Pacific, Africa, the Caribbean and the United Kingdom to experience parliamentary life in a real-life situation in the parliamentary chamber which included taking part in parliamentary procedures as party representatives or independents, debating legislation and motions, holding a committee of inquiry and facing the press in a media conference.

Speaker Purick said: "This is an exciting time for young people coming from all over the Commonwealth who will be using the parliamentary chamber for their debates and will have the privilege of CYP7 being opened by his Honour the Administrator of the Northern Territory. We will be showing the world what our parliament has to offer and the public galleries are open to anyone who would like to come and watch. We are very pleased to be welcoming the best from around the Commonwealth of Nations to take part in this event in Darwin and wish them well in their endeavours." 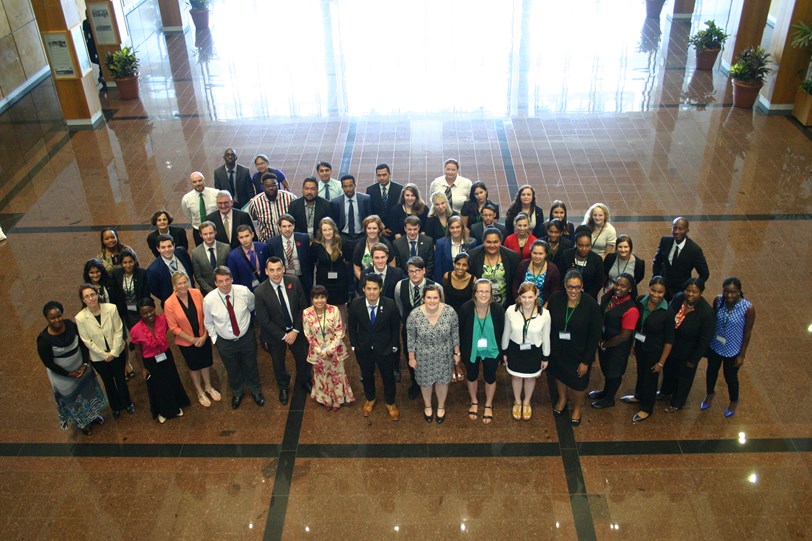 The 6th CYP was co-hosted by the CPA and the Legislative Assembly of Mmabatho, Northwest Province, South Africa. It was attended by over 50 young people from 7 of the 9 Regions of the CPA. The CYP took place between the 2-8 November 2014. 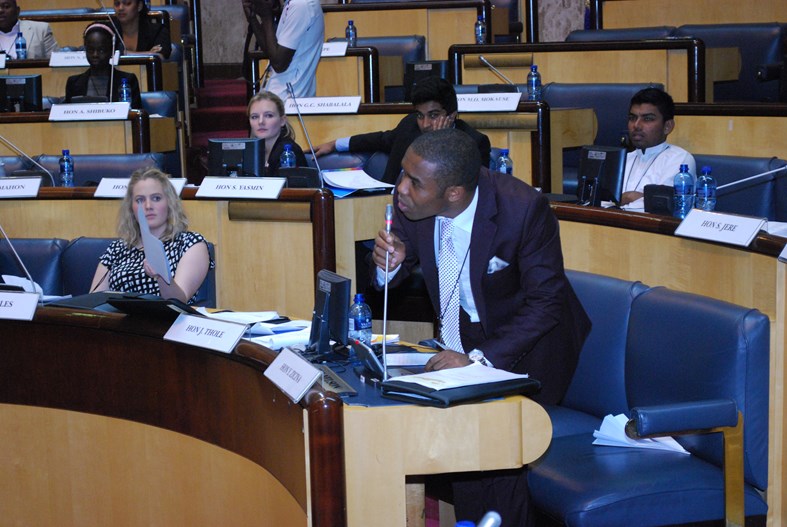 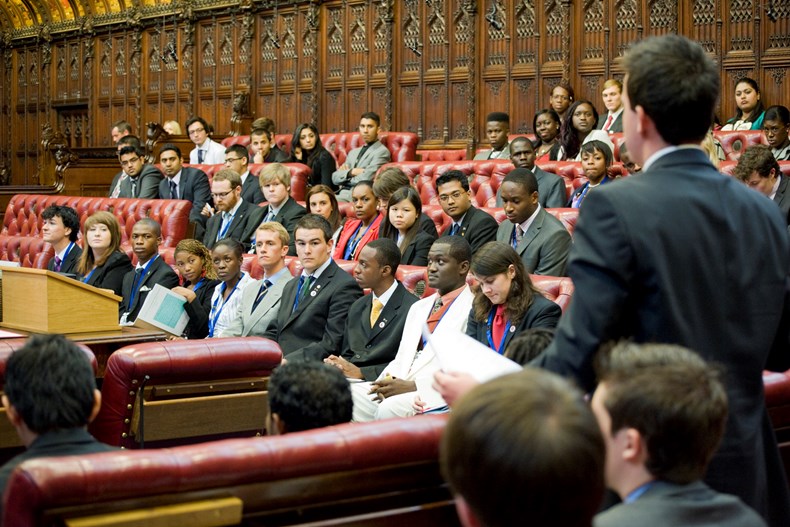 As of 2020, a total of 7 participants went on to become parliamentarians, including Senator Sam Mézec from Jersey (pictured below in 2011). It is also worth noting that a further 65% of participants are now employed as public servants within their respective jurisdictions. 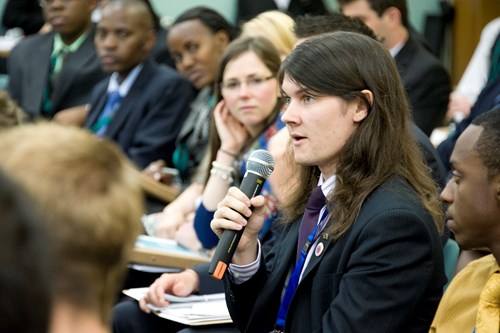 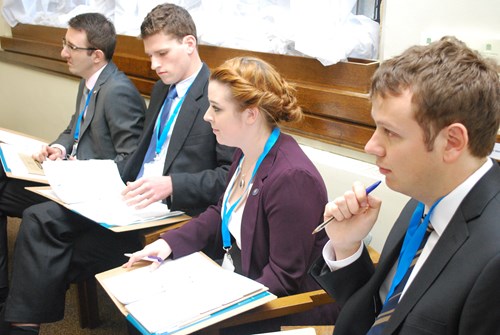 With the Commonwealth’s 53 member countries having a combined population of more than 2.4 billion, of which more than 60% are under 30 years of age, the CPA launched the Roadshows to strengthen its outreach to the Commonwealth’s young people. The CPA Roadshows seek to increase awareness of the CPA amongst schools, colleges and universities to inspire the next generation of Parliamentarians.

The Roadshows also increase awareness of the important work done by the CPA in promoting democratic governance across the Commonwealth and to connect Parliamentarians with their young people in schools, colleges and universities to inspire the next generation of young leaders.

The CPA encourages its Branches and Regions to host CPA Roadshows and works with international organisations to partner on the initiative. 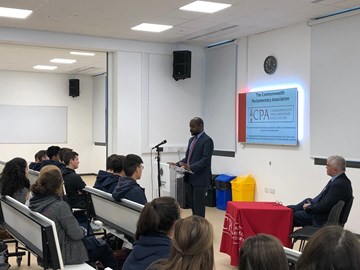 The CPA Headquarters Secretariat has updated and re-launched its Commonwealth Day Youth Engagement Pack in advance of Commonwealth Day 2021. Educating the public, particularly young people, about the institutions of democracy is essential to democratic renewal and Commonwealth Day provides an ideal opportunity for public engagement and outreach and can be used for both Commonwealth Day activities and beyond.

The Commonwealth Day Youth Engagement Pack was first launched in 2020 to support parliamentary outreach activities on Commonwealth Day. It has been updated with ideas and resources that provide options for virtual activities in recognition of the lockdowns currently in place in many Commonwealth jurisdictions due to COVID-19.

The pack features:
• A handbook outlining potential activities for Commonwealth Day
• A series of tools to use on Commonwealth Day, such as a quiz, factsheet and activity cards
• A leaflet with further information on this year’s Commonwealth Day theme

Commonwealth Day is celebrated annually on the second Monday of March and this year it falls on Monday 8 March 2021. Public engagement is crucial in connecting, innovating and transforming social networks and cultures of all societies as it encourages an informed and involved citizenry which is crucial for a functioning democracy. Although Commonwealth Day celebrations may be limited this year due the current global pandemic, the CPA and its CPA Branches hosted a series of online and virtual events. 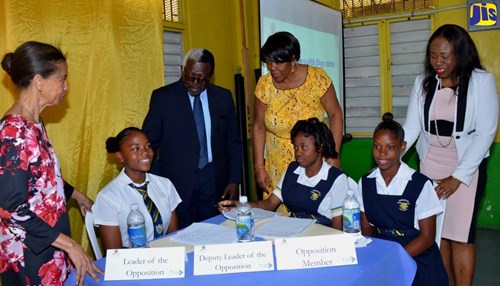 The Speaker of the House of Representatives of Jamaica, Hon. Pearnel Charles, Sr visiting pupils at Kingston School in 2020.

Download our Youth Engagement Pack ahead of Commonwealth Day to help kickstart your youth engagement activities on the day.

The CPA published a new Teachers’ Resource Pack on the Commonwealth, Parliament and Democracy in collaboration with the British Council and the Commonwealth Secretariat. The resource was focused on students aged between 7 and 14 and the materials are designed for teachers to help provide factual information and exciting cross-curricular activities for students to learn and think critically about the Commonwealth, parliament and democracy more broadly.

Learn more on the British Council Schools and Resources