The Commonwealth Women Parliamentarians (CWP) network hosted its seventh virtual roundtable on gender sensitive Parliaments for the Caribbean, Americas and the Atlantic Region (CAA) Region on 7 October 2021. As the final roundtable delivered by the CWP network as part of its series of regional discussions, this roundtable served as a platform for intimate discussion for both Parliamentarians and parliamentary staff and encouraged attendees to speak to the very important need to deliver practical work and establish effective practices that bring about gender equality and institutional reform.

The Parliamentarians and parliamentary staff in attendance from the CAA Region discussed in great depth the process of gender sensitising and identified steps that Commonwealth Parliaments can take to enable change, such as recognising the role of critical actors, Presiding Officers and male allies. Participants were also informed of the importance of having a ‘gender conscious’ administration. 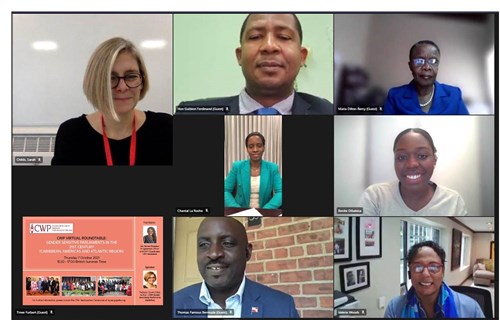 The forum also gave attendees the opportunity to hear from Dr Sarah Childs, Professor of Gender and Politics at Royal Holloway University of London, and the author of the CWP Gender Sensitising Parliaments Guidelines: Standards and a Checklist for Parliamentary Change, on the various implementation strategies that Parliaments can adopt to ensure that they are conducive to gender sensitive reform.

In her opening remarks, CWP Steering Committee Member for the CAA Region and Speaker of the Belize House of Representatives, Hon. Valerie Woods underlined that

Speaker Woods concluded her remarks by encouraging Members to

‘be proactive, bold and get the answers to the questions that will help strengthen our parliamentary institutions’.

Reflecting on all the discussions that have taken place in the seven CWP roundtables across different Regions, Dr Sarah Childs shared that the roundtables have been

‘a fantastic opportunity to learn about and from Parliamentarians around the Commonwealth about their experience of gender sensitive Parliaments and what efforts are already underway as well as success rates in different parts of the world’.

In closing, CWP Network Coordinator, Ms Bénite Dibateza, informed participants of the opportunities available to all CPA Branches within the Region to register their Parliament to benefit from a CPA funded Gender Sensitive Review. Using the CWP Guidelines, the Gender Sensitive Review will allow for a comprehensive and systematic examination of a Parliament’s formal and informal rules, norms, practices and procedures and look at ways in which institutional gender sensitivities or insensitivities mediate parliamentary activities, interactions and outputs, across representation, policymaking, legislation, and scrutiny. It is hoped that the review will seek to establish an initial benchmark against which future gender sensitising efforts and developments within your Parliament can be measured.

The following CPA Branches were represented at the CWP virtual roundtable: Belize; Bermuda; Cayman Islands; Jamaica; Saint Lucia; Trinidad and Tobago; and Montserrat. In addition to the CPA Branches from the CAA Region, a representative from ParlAmericas Gender Equality programme, Ms Eilish Elliot attended the roundtable.

This CWP roundtable is the seventh and final event in a series of virtual regional discussions which aimed to target Parliaments across the nine Regions of the CPA.

The CWP roundtables, which have all been delivered virtually, aimed to increase the number of gender sensitive Parliaments across the Commonwealth by facilitating dialogue and an exchange of best Commonwealth practices. The programme follows the recently published CWP Gender Sensitising Parliaments Guidelines: Standards and a Checklist for Parliamentary Change that was successfully launched in October 2020. These guidelines provide an outline of gender sensitising standards which Commonwealth Parliaments can use as a benchmark to achieve.

For more information about how your Parliament can register to benefit from a CPA funded Gender Sensitive Review or how to access a recording of your Region’s CWP Roundtable: Gender Sensitive Parliaments in the 21st century, please contact the CWP Network Coordinator at benite.dibateza@cpahq.org.